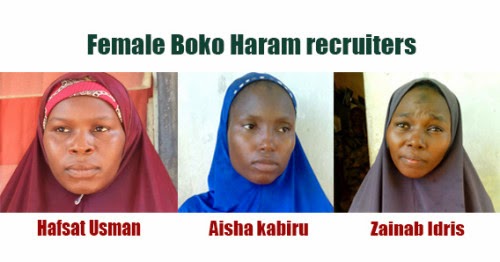 The women recruit other women into Boko Haram.
The Defence Headquarters has announced the arrest of three suspected female terrorists who have been secretly recruiting ladies into the female wing of the terrorist group, Boko Haram. According to a statement issued in Abuja on Friday by the Director of Defence Information, Onyema Nwachukwu, the arrest followed a failed suicide bombing attempt on a military facility by a female terrorist in Gombe recently.
It said the suspects, Hafsat Bako, Zainab Idris and Aisha Abubakar, were intercepted while travelling to Madagali in Adamawa from where they were would move to the forest to reunite with their cohorts. “Investigations revealed that the suspects, led by Hafsat, have the mission to recruit members into the female wing of the terrorist group as well as conduct espionage for the group.

Hafsat’s link with the terrorists group had been a subject of investigation since 2012 when security agents on a man-hunt for one Usman Bako, her husband, who was identified as a terrorist, stormed their residence in Jimeta,” Mr. Nwachukwu disclosed.

He said that the man-hunt resulted in the discovery of an AK- 47 rifle and two loaded magazines
Mr. Nwachukwu, a Colonel, also stated that Mr. Bako later died in an encounter with troops in Sokoto, where the terrorist had relocated to continue his activities. He said that Hafsat continued with the terror group, specialising in surreptitious recruitment of members into their fold.

“The three female suspects were luring ladies, especially widows and young girls, by enticing them with male suitors who are mainly members of their terror group for marriage. Before their arrest, they were on a mission to take additional briefing from the leadership of the terror group. The trio have been operating together as members of the intelligence team of the group and their arrest has yielded information still being verified by security agencies,” the Director of Defence Information said.

The Federal   Government has reduced the number of companies licensed to import gasoline in the third quarter to 27 from 40 in the previous three months, lists corroborated by regional industry sources have showed. According to Reuters, the 27 companies were allocated gasoline import rights by Nigeria’s downstream regulator Petroleum Products Pricing Regulatory Authority (PPPRA), […]

The Governor of Ebonyi State, Dave Umahi, on Thursday explained why the planned protest by traders against the relocation of some Boko Haram suspects to Anambra State did not hold in the state. He told journalists during an inspection tour of ongoing projects in Abakaliki that since the suspects had already been taken to Abuja, […]

Nigeria: As We Are – Recurring Thoughts and Events in a Nation

THE news photographs of union members and some staff of NEPA, otherwise known as Power Holding Company of Nigeria, PHCN, announcing the “obituary” of Professor Barth Nnaji, an Enugu State man, but a great citizen of the world would have been funny if not a pathetic reflection on our collective sense of responsibility for the […]