President Barack Obama’s speech at the UN on Wednesday was welcomed by almost all major American Jewish organisations and billed in the media as his most pro-Israel yet.

But, if you listen to the current crop of Republican presidential hopefuls, you get a rather different impression.

On Tuesday, the frontrunner, Texas Governor Rick Perry, blamed the president for encouraging the Palestinians to seek membership at the UN.

“Simply put, we would not be here today, at the precipice of such a dangerous move,” he said, “if the Obama policy in the Middle East wasn’t naive, arrogant, misguided and dangerous.”

Not to be outdone, his main rival, former Massachusetts governor Mitt Romney called events at the UN “an unmitigated diplomatic disaster,” and repeated a much-quoted line from earlier in the year.

“It is the culmination of President Obama’s repeated efforts over three years to throw Israel under the bus,” he said. 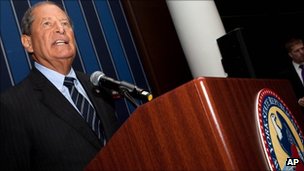 These are bold, incendiary claims, but the candidates clearly feel there is much to be gained from highlighting the president’s alleged hostility to the state of Israel.

For Republicans, this probably has as much to do with courting staunchly pro-Israel Christian conservatives as wooing Jewish voters.

But recent events in New York suggested that Jewish voters are up for grabs too.

In a district that had not been in Republican hands since the 1920s, Mr Turner successfully exploited Jewish anxieties over the president’s Middle East policy, and benefited from an endorsement from the Democratic former New York mayor, Ed Koch.

“Electing Bob Turner on Tuesday will send a huge message to President Obama that we’re not happy with how he’s dealing with Israel,” Mr Koch said in a robocall to voters before last week’s election.

The result clearly reflected frustration over the state of the economy, but Republican candidates in other Congressional districts with significant numbers of Jewish voters will have taken note.

Congress itself remains a bastion of pro-Israel sentiment, as witnessed by numerous recent threats to block $50m (Ã‚Â£33m) in aid to the Palestinian Authority if it continues its pursuit of UN membership.

Not for the first time, Congress seemed to go too far, even for the government of Israel. According to the New York Times, the State Department enlisted the help of Prime Minister Benjamin Netanyahu in urging members of Congress not to block the aid.

Such a move, it was feared, could jeopardise essential Palestinian police training, with damaging effects on Israeli security.

Despite Mr Netanyahu’s complex, sometimes frosty relationship with the Obama White House, he remains a darling of Congress, receiving a rapturous reception in May, when he addressed a joint session.

Members rose to their feet for three dozen standing ovations, the sort of treatment Barack Obama can only dream of.

Mr Netanyahu was quick to highlight the bipartisan nature of the support.

“I see a lot of old friends here,” he noted at the time, “and I see a lot of new friends of Israel too. Democrats and Republicans alike.”

Over the summer, more than 80 members of Congress, from both parties, visited Israel. Members have been falling over themselves to introduce supposedly pro-Israel legislation, including a resolution endorsing Israel’s right to annex the West Bank – proposed by a Republican – and a move to cut off military aid to any country supporting the Palestinian bid for UN membership, sponsored by a Democrat.

Such moves have been seen before, but the strength of the current pro-Israel climate on Capitol Hill clearly complicates Mr Obama’s job as he tries to navigate the mine-infested waters of Middle East diplomacy.

It also poses a domestic political challenge. With next year’s presidential election starting to loom large, the season for traditional White House caution on Israel-Palestine has arrived. Which may go some way towards explaining the tone of President Obama’s speech this week.

Man Béheads Another For Making Noise

The Fomena Police have arrested a 20-year-old man for allegedly beheading a man and wounding another.   Samuel Quansah, alias Kwadwo Tabi, was arrested at Ahimase, near Nzema, in the Western Region, where he had gone into hiding a week after committing the crime at Akwanserem, near Fomena, in the Ashanti Region.   The Fomena […]

Amb.Vicki Huddleston, the U.S. Deputy Assistant Secretary of Defence for in Africa, says that her country and Nigeria will strengthen ties in defence. Huddleston gave the assurance on Friday in Abuja when she paid a courtesy call on the Minister of State for Defence, Mrs Olusola Obada, in her office. She said that she came […]

Aid group: Hundreds of children fleeing drought arrive in Kenya daily More than 800 Somali children are arriving at crowded refugee camps in Kenya daily after walking for days to escape a prolonged drought, an aid group said this week. About 10 million people are at risk of starvation as the Horn of Africa region […]