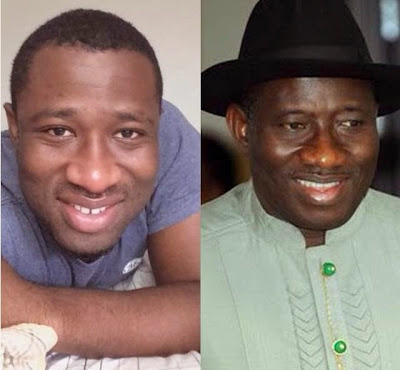 There were  alleged reports that Ibime Belema-Jonathan, a 24-year-old native of Nembe, Baylesa, announced on Twitter yesterday that he is one of the president's illegitimate sons.

"According to Belema-Jonathan, his mother was a receptionist in a Port Harcourt hotel (which shall remain undisclosed) when she met Goodluck nearly 25 years ago. Their relationship was made private because of the risks it posed to Goodluck's then fledgling political career. He has decided to disclose this information after recently being informed by his mother, who had just passed away. It is his desire for his father to assume and fulfill his fatherly duties after a lifetime of absence."

Well, we are in a season of political campaign and anything can come up but the resemblance  is striking

Abuja – Nigeria risks revolution if the government does not address mounting frustration in one of the world’s most corrupt countries, a committee appointed by the president to probe post-vote violence said Monday. “General insecurity of life and property in people’s houses and on the highways and kidnapping are adding fuel to the fire of […]

Oprah Winfrey got it wrong