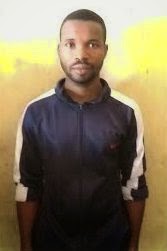 Press statement from the Force Headquarters

A member of the Nigeria Security and Civil Defence Corps (NSCDC), Assistant-Inspector Lasisi Kabir Iyanda, has been arrested and detained in Police custody over the brutal murder, on 27 June, 2014, of a 32-year-old Kamaldeen Muritala, an Islamic Religious Knowledge teacher attached to Titilope Islamic Comprehensive High School, Ejigbo, Osun State.
Preliminary enquiry by Police detectives from the Osun State Police Command, Osogbo reveals that the victim, Kamaldeen Muritala died at Baptist Hospital Ejigbo from complications arising from fatal stab wounds inflicted on his neck with a jack-knife by the NSCDC member during an argument close to the entrance of an examination hall where National Examination Council (NECO) examination was taking place. Continue…

Following the demise of the deceased Islamic teacher, students of the school attempted to raze down office structures belonging to the NSCDC as well as those of other government establishments in the area, but the timely intervention of the Police prevented further breakdown of law and order.
Meanwhile, the Police High Command has commended the officers and men of Osun State Police Command for their timely intervention which helped to rescue the 30-year-old suspect concerned as well as other property and whittle down what otherwise might have turned into a major catastrophe. The apex Police Authority however, enjoins citizens never to take laws into their own hands no matter the provocation, promising that justice would be served in this case.

Abuja — Arising from the decision of the F.C.T High Court Gudu, to discharge the coordinator of the defunct Police Equipment Foundation (PEF), Mr. Kenny Martins and three others of the criminal case filed against them, the Economic and Financial Crimes Commission (EFCC) has appealed to Court of Appeal on grounds that the ruling is […]

Professor Dora Akunyili on Wednesday made her last appearance at the weekly meetings of the Federal Executive Council as she resigned her appointment as Minister of Information and Communications Her resignation takes effect from today (Thursday). Already, Jonathan has appointed the Minister of State for Information and Communications, Mr. Labaran Maku, as the substantive minister. […]

Nigerian Lovers caught having sex in the office (PHOTO)

What on earth will make lovers to have sex in the ofiice of all places? What happens to their rooms or hotel rooms? Well, it's only these lovers that were caught in the act in an office that can explain the reason(s) behind their actions. I don't know what to say again o. I leave […]