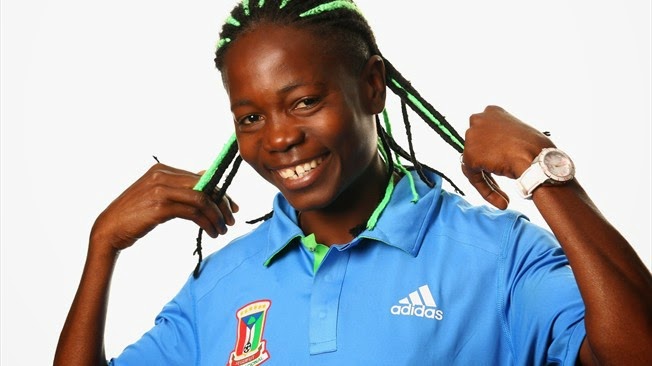 An Equatoguinean female footballer Genoveva Añonma has revealed that the Confederation of African Football, CAF, forced her to strip naked to prove she was a woman

Genoveva Añonma who took part in the 2011 FIFA Women’s World Cup, scoring only two goals in the tournament. Prior to the World Cup, Añonma and two other players from New Guinea had been accused of being male by opponents.Añonma rejected the allegations, however, it was not enough for African football authorities. According to the forward, she was forced take her clothes off in front of officials from CAF and her own team.

Speaking to BBC journalists she lamented,“I was really upset, my morale was low and I was crying.

It was totally humiliating, but over time I have got over it.”She became the first foreigner to win the Bundesliga top-scorer award when she scored 22 goals in the 2011–12 season.  In 2012 she was named African Women Footballer of the Year, now she plays for German club team Turbine Potsdam and her country team.

Butch Harmon has said that Tiger Woods ‘has lost his confidence’ but has offered to help him rediscover the form that won him 14 Majors, even though he thinks the former world number one will be too proud to take him up on his offer. Woods worked with Harmon between 1996 and 2002, and Harmon […]

Emmanuel Amuneke, Golden Eaglets’ Head coach, has described the team’s first half performance in the pulsating 1-1 draw against Guinea here at the 11th African U-17 Championship as the worst since he took over the reins of the team almost a year ago. The lads seemingly collapsed in the first stanza as the young Syli […]

After many years of threatening to quit competing for Ghana, heptathlete Margaret Simpson appear to finally pull the straw after revealing she has applied for dual citizenship with Italy and Mauritius who have both expressed interest in her services. The 3-time Africa Athletics championship gold medallist says she is tired after many years of frustrations […]