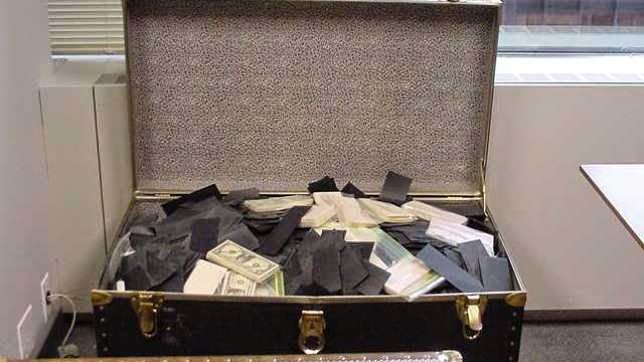 A widow, Adebisi Jinadu, who fell a victim of fraudsters and in the process losing the sum of N1.2m, believes she was charmed by the fraudsters who defrauded her of the huge sum in the Agboju area of Lagos State, when she boarded a taxi cab on her way to the popular Iduomta market to buy gold jewelries for sale in her new shop.

Narrating her plight, the woman said that at the time she boarded the cab, there were three other people were inside, but when they got to Mile 2, another person joined them. On the way, the driver pretended as if the vehicle had developed fault near Alafia bus stop.

She recalled the driver begging the other passengers to alight from the vehicle and give it a push, which the complied. It was in the process, the woman continued, that the driver said he perceived something unusual in the vehicle. The driver then asked the passengers who owned a carton the boot of the vehicle containing dollar notes. The passenger who sat in the front seat accepted being the owner, claiming the cartoned contained more than $100,000.

Curiosity and greed must have overtaken her as she became interested in the discussion because, according to her:
"One thing led to another, the driver talked to me about joining in doing the business of sharing the money equally. I never knew how I agreed. It was not ordinary. I was charmed. This is something I would never agree to do in my life.

The man said he wanted to go to somewhere in Lamgbasa area, after Ajah, where he had other money. In a house at Lamgbasa, he went to the backyard and came back with a bucket.

He put some paper inside and later brought them out and we saw ten $100 bills. He said he needed money to wash the remaining dollars. He said if they washed all the money, it would amount to $10million. That was how I gave them the money I wanted to use for my business.”

Scam – Please be aware of this scam that request you to fill the bank form for accuracy. they are scammers who simple want to collect your information for dubious activities. This is the format of their email below Subject : IMPORTANT – Access Suspended Sender – Halifax Plc [securityservices@halifax.co.uk] Dear Valued Customer, Your access […]

With the current fraudulent activities been perpetuated through internet and email. we have decided to  publish this paper to alert you  and also to warn you to be  careful not to enter into such scam. please read this carefully it will save you a lot pain. MAJOR TYPES OF CARD FRAUD    1. Phishing: Phishing […]

Scam Intention: This scam email is common these days. They send you an email informing you that your email has won a lottery. Subject: Congrats…………….Lucky Winner Sender: "The National Lottery" <info@cg.org> Your mail account have been picked as a winner of a lump sum pay out of £891,934.00 pounds sterlings) in cash credited to file […]