VATICAN CITY (AP) — Pope Francis called for structural renewal in the Catholic church to keep up with the times, although advising future priests and nuns Saturday to shun costly trappings like the latest smart phones so they can use more resources to help the poor.

Francis has been waging a campaign to root out corruption and power plays in the Vatican's bureaucracy and to keep sight of what is essential in the church he was elected in March to lead.

The Argentine-born pontiff offered the encouragement for renewal in a homily during Mass Saturday at the Vatican City hotel where he lives. Francis told Catholics "not to be afraid of renewing some structures" to accord with "the places, the times" and the people, but he didn't specify what needed to be changed.

He said, "In Christian life, even in the life of the church, there are ancient structures, transient structures: It is necessary to renew them!"

Later, he gave an off-the-cuff lecture to a Vatiacn auditorium full of seminarians and novices, and to thunderous applause, told the future priests and nuns to keep "freshness" and "joy" in their lives, and took to task seminarians and novices who "are too serious, too sad. Something's not right here," Francis told his rapt audience. "There is no sadness in holiness," said Francis, saying that such clergy lack "the joy of the Lord." 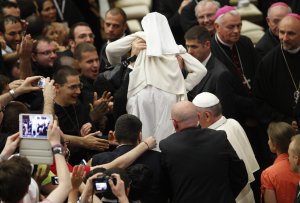 "If you find a seminarian, priest, nun, with a long, sad face, if it se ems as if in their life, someone threw a wet blanket over them," you should conclude "it's a psiatric problem, they can go, 'buenos dias,''" Francis said, opting for a word in his native Spanish to indicate those clergy are not suited for their vocations.

He cautioned the future priests and nuns that he he wasn't talking about superficial joy — "the thrill of a moment doesn't really make us happy." Francis warned his audience against seeking "the joy of the world, the latest smart phone, the fastest car."

"It hurts my heart when I see a priest with the latest model car," Francis said, then joking that his audience will think "now we have to go by bicycle."

"Cars are necessary. But take a more humble one," said Francis, who from the day he took office declined to move out of the hotel during the conclave of cardinals and into the ornate Apostolic Palace that is the traditional home to pontiffs. "Think of how many children die of hunger" and dedicate the savings to them," Francis said.

While there have been calls within the church for the Vatican to ease the requirement for celibacy for priests, nuns and brothers, Francis praised chastity. "We are victims of a culture of the 'temporary,'" Francis said, adding that celibacy vows for those becoming priests or nuns should be a "definitive choice." 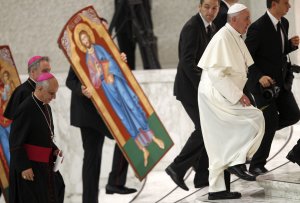 Pope Francis arrives for a meeting with novices at the Paul VI hall, Vatican, Saturday, July 6, 2013 …

The Vatican allows married clergy in strictly limited cases: married men in the Eastern rite church can be ordained priests, and married Anglican clergy who later convert can stay married after joining the Catholic church.

At one point he turned to an aide and asked how much time he had with the young future priests and nuns. Told that he could stay there "until tomorrow" if he wanted, Francis joked to his audience that they would need "sandwiches and Coke if we go till tomorrow," drawing roars of laughter. In the end, he spoke for about an hour with the seminarians and novices, and will celebrate Mass in St. Peter's Basilica on Sunday morning.

During his remarks, Francis praised Mother Teresa, the late nun who cared for the most impoverished sick of Calcutta, India, and held her up as a courageous example. "I would like a more missionary church," the pope told the young people, who seemed to hang on his every word. "Not so much a tranquil church, but a beautiful church that goes forward."

His lauding the nun will likely be seen as an indication that Francis will be eager to see Teresa made a saint. On Friday, the Vatican announced that Francis had decided to canonize later this year two predecessors, John Paul II, and John XXIII, even though the required miracle attributed to John XXIII's intercession and, according to church rules needed for sainthood, hadn't been certified. Bestowing sainthood on John Paul II, who died in 2005, will put him on a much faster path to canonization than Teresa, who died in 1997 and is widely considered a candidate for rapidly-conferred sainthood.

Francis' decision to OK sainthood for John XXIII without the second miracle pleased that late pope's family in northern Italy. 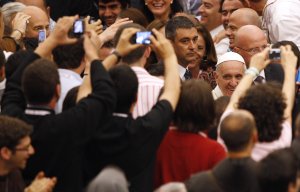 Pope Francis arrives for a meeting with novices at the Paul VI hall, Vatican, Saturday, July 6, 2013 …

"We're happy. We were waiting for it for a long time," said Emanuele Roncalli, a great nephew of John XXIII, who was born Angelo Roncalli near Bergamo. "Even though you can still call him, not blessed, not saint , but just Pope John" in keeping with the late pontiff's stress on humility, said the great-nephew in a phone interview with The Associated Press.

In waiving the miracle requirement, Francis was essentially agreeing with the late pope's personal idea that "sainthood is lived during all of one's life," said Roncalli.

A journalist for the local daily L'Eco di Bergamo, Roncalli had written in Saturday's edition that his great-uncle, who died in 1963 when Roncalli was 2 years old, "wanted to be a holy man, in the fullness of the term." His great-uncle's concept of sainthood "could be defined as an available sainthood — if not actually reachable — by all," Roncalli wrote.

The late pope's notion of sainthood "isn't the sainthood of miracle workers, of healers," the great-nephew wrote

Following last month’s three-week Synod, the Pope has still not provided a clear message on the future of Catholic homosexuals, thousands of whom remain locked up inside the Vatican. Conservative bishops continue to assert that God made Adam and Eve and not Adam and Sanjeev – a common Hindi boy’s name missing from the New […]

Pope Benedict XVI is nearly blind in one eye and was advised by his doctor to limit air travel because of his high blood pressure, the website Vatican Insider reported on Wednesday.   The report also said the 85-year-old pontiff often has problems sleeping and has fallen out of bed several times in recent years […]

We get these steps from Ephesians 4:31 we read above.  Mark the words in the verse…Step 1 – BitternessA feeling of resentment…someone has done you wrong! Step 2 – Wrath(Gk) meaning ‘hot’….A slow burn starts to smolder inside as you think about how the person or events have ‘done you wrong’…. Step 3 – AngerWhile […]