Releasing his annual prophesies for the year 2013 at a cross over service to usher worshippers into the New Year at the Redemption Camp, he explained that there could be more devastating natural disasters like flood if necessary precautionary measures are not taken soonest to avert such calamities.

Describing the New Year as a year of signs and wonders, he said generally, God says this year will be better than last year.

According to Pastor Adeboye before the middle of the year, many Nigerians will have reason to say hope rising, adding however, that prayers and supplication be intensified .

He told the crowd of worshippers that God spared the lives of certain individuals in the country last year because of intercessory prayers of the saints, noting â€œthe prayers of some of you minimized death of prominent Nigerians last year, donâ€™t stop praying.â€

Speaking on the prophecies for individual Nigerians, Pastor Adeboye said, â€œNo matter the darkness around you, your star will shine brighter. 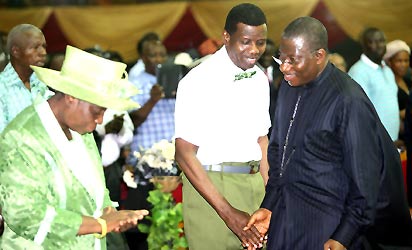 â€œGod says, He will speak peace to your storms; Certain individuals have been stagnated for sometimes, the reasons for your stagnation will become known, will be addressed and will be eliminated, therefore progress will follow.â€

Continuing on the individual category, Pastor Adeboye said in many senses of the word, this year will be of completeness.

On the international platform, the cleric said prominent world leaders need a lot of prayers so as not to die in office.

In addition, he said prominent Church leaders need prayers against planned scandals, even as he said that weather conditions may get worst, much worst, unless prayers are intensified.

But there is a cheery news when Adeboye said: â€œWe should expect a major breakthrough in medicine this year,â€ concluding that nations who pass unholy laws will have a taste of divine fury.

Earlier in a brief sermon titled; â€œPreparing for a year of signs and wondersâ€, he outlined certain principles to enable one tap into heavenly reservoir of the miraculous.

According to him, this year will be a better year than the just ended one, maintaining that the principles must include praise and worship of God, putting God first before any other consideration; evangelism; control the fullness of your joy, pointing out that one who is close to God can control even the weather around him.

Adeboye was very particular about the praise of God as a veritable tool for signs and wonders, noting that one can pray, study the Bible in silence but no one can praise God in silence.

The congregation applauded when he said: â€œYou can never praise God quietlyâ€, stressing that praising Him comes from a heart of gratitude and itâ€™s not quietly.

â€œIf they say we are crazy for shouting Hallelujah in our environment and wherever we find ourselves, then that is a good kind of craziness,â€ he stated, adding that nobody says thank you to his benefactor with his mouth closed.

While assuring worshippers that 2013 is a year of doors, Adeboye said it is one thing to enter into a New Year and it is another to have a brand new beginning, hence he enjoined every Nigerian to live right with God who only has the capacity to give of His limitless bounties and guarantee all round peace and calm every storm in our lives.

The first moments of Pope Francis 1, 267th successor of St. Peter, who entered the conclave as one of the 115 cardinal-electors with real name of Cardinal  Mario Jorge Bergoglio, from Argentina, were characterised by prayer. He arrived to the central balcony of St. Peter at 8.20 (Local Time) gazing upon the cheering crowd for […]

The idea of secularized, new age karma is having its moment in the limelight. Newspapers and magazines use the word to spice up headlines or subtitles with colorful flair.

Since assuming control of the Catholic church last year, Pope Francis has made a habit of breaking with his predecessors. And in the latest such incident, the pope stunned those inside St. Peter’s Basilica on Friday when he publicly confessed his sins to a priest during that day’s service. After reading a sermon at the […]