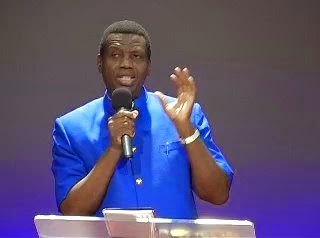 The General Overseer, Redeemed Christian Church of God, Pastor Enoch Adeboye, on Friday has said he does not trust politicians.Adeboye spoke in Obafemi Awolowo University, Ile-Ife, during a two-day interdenominational prayer.According to the cleric, politicians in most cases hardly fulfil their promises.Adeboye illustrated his claim with the story of three travellers – an Indian, a Jew and a politician.

He said while the three men were travelling, they had a problem and went to a farmer for help, but the farmer said he could only accommodate two people.Adeboye said the Indian volunteered to sleep in the barn, but returned few minute later that there was a cow there.The Indian, according to the illustration, said he couldn’t sleep in the barn because cows were gods worshipped in his country.

The Jew also came back complaining that pig was inside the barn and that the place was dirty.The politician also volunteered to sleep there, but instead of the politician to come back to complain, Adeboye said it was the pig and cow that came knocking that the politician should be sent away because he promised to make the environment, including the barn conducive with air-conditioner.

The cleric said, “I don’t trust politicians. Politicians are liars. They don’t fulfil most of their promises. A politician can tell you that they will give all of you (students) chicken each, which we all know it is impossible.”The RCCG General Overseer, however, asked Nigerians to stop worrying themselves over who would emerge winner in the next general elections.According to him, God is a master planner who has already planned the leadership development of Nigeria.

Adeboye said, “God has already planned who will be the President of Nigeria. God has already planned that before we were born. God is not like human beings who doubt what is to be done. He has plan for everything.”Vice-Chancellor of OAU, Prof. Bamitale Omole, hailed the cleric for his yearly presence in the university, saying the initiative was having positive impacts on the school.

He said, “We appreciate the love of Pastor Adeboye. With God and his presence last year, we had no calamities and also emerged as the best university in Nigeria. I urge students to be prayerful and cautious of what they do as God will continue to protect us.”

Joel Osteen: “Satan attacks you when you are closer to destiny”

The enemy has come to steal, kill and destroy. The enemy always fights us the hardest, when we are close to our victory. Many Christians give up, at the moment of challenge, not knowing that the devil's desire is to distract us from the mark of our blessing, through temporary challenges. When you are tempted […]

MORAL RELATIVISM: The Fundamental Cause of Sex Degeneracy

The problem of sexual values questions the moral absolutism, which believes in the universality of moral values. Popular views indicate that morality has no firm foundation, that morals are based on individual feelings and social beliefs. Such views on morality naturally arise in a nation and a world as diverse as ours Taking the common […]

CHRISTIANS all over  the world will today mark Ash Wednesday, the first day of Lent; its official name being â€œDay of Ashes,â€ so called because of the practice of rubbing ashes on oneâ€™s forehead in the sign of a cross.   According to a release by the Director of Social Communications, Catholic Archdiocese of Lagos, […]