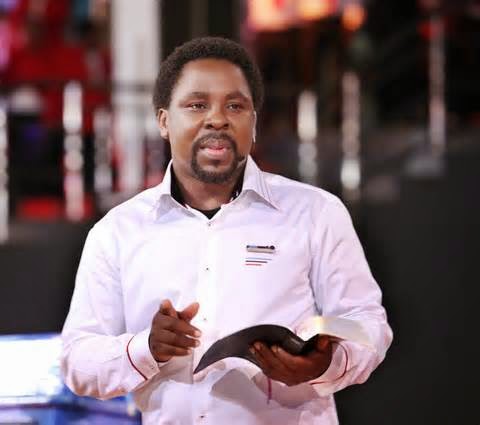 An exclusive interview with the popular Nigerian pastor T.B. Joshua appeared on the pages of the official magazine of the Synagogue Church Of All Nations (SCOAN).

The SCOAN founder was asked challenging questions about the September 12 tragedy that rocked the guest house belonging to his church. As a result of the building collapse more than 100 people died.Many blamed the clergyman for illegal erection of extra storeys on the building, while Joshua insisted it was an attack.

QUESTION: What is the secret of your calmness in the midst of the storm?

QUESTION: We saw on Emmanuel TV that when you returned from Colombia, you said, “There is a cloud that covers Nigeria… Cloud means trouble. Look at what is happening here. You will not see it on national TV but if you learn that they bombed here, one of you will call CNN that they have bombed The SCOAN… I am telling you something far but now, I am telling you something as close as my mouth.” What you said came to pass but why could you not stop it happening?

ANSWER: A servant cannot be greater than his master. I am a servant, taking orders and receiving orders. What He tells me, I say, and what He shows me, I see. His will must always supersede.

QUESTION: The people that died in the tragedy – why do you call them martyrs? What does it mean?

ANSWER: Yes, they had an appointment with God and they didn’t let God go.

QUESTION: How did you manage to put up a CCTV camera directed toward the sky when it is supposed to be focused on a subject or object? How did you have a CCTV camera positioned near the bottom of the building which caught the bomb exploding?

ANSWER: That is because I am a man of vision and mission. Without evidence and proof, I would not remain the man of God you know. God will never allow a challenge that will surmount us; we are always greater than our challenges.

1 Corinthians 10:13 – God will never allow a servant to be tempted beyond what he can bear because the beginning of his mission and the end of his mission are under God’s eyes. By this, we know a man of God.

QUESTION: But for the CCTV footage that showed the strange plane and the explosion, what might have been the situation when this happened? What story would you have told?

ANSWER: You mean, if there was no CCTV to capture the plane and the blast of the bomb? Then, there is no vision. A man without vision is a man without God. This is what Gamaliel said in Acts 5:38-39 – “And now I say to you, keep away from these men and let them alone; for if this plan or this work is of men, it will come to nothing; but if it is of God, you cannot overthrow it – lest you even be found to fight against God.”

It should be noted  that the trial started to investigate the reason for collapse and the guilty party is ongoing.

An interview with a security guard who worked for Chris Okotie and also accused him of stealing his woman. Read Interview below. When did you join Rev. Chris Okotie’s Household as a member? When did you work there and for how long? How were you sacked? I joined Household in 2006. I was interviewed by […]

Abuja – Christian faithful in Nigeria joined their counterpart worldwide to celebrate the passion and death of Jesus Christ on Good Friday. Good Friday marks the crucifixion of Jesus Christ and his death at Calvary. In Lagos, some clergy in their messages urged the leaders at all levels of government to imbibe the spirit of […]

VATICAN CITY (AP) — Pope Francis warned Vatican administrators Saturday that their work can take a downward spiral into mediocrity, gossip and bureaucratic squabbling if they forget that theirs is a professional vocation of service to the church.   Francis made the comments in his Christmas address to the Vatican Curia, the bureaucracy that forms […]