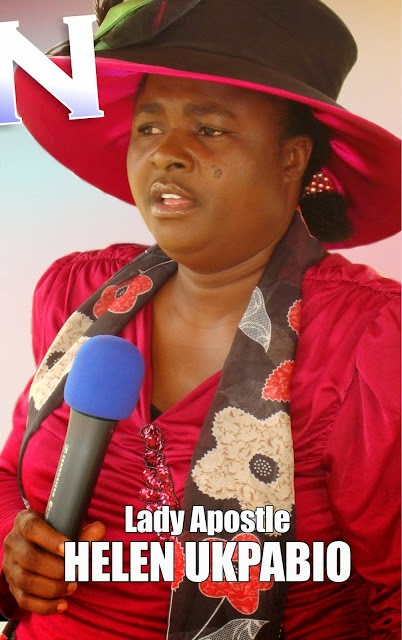 Helen Ukpabio says her teachings that a child “under the age of two” who exhibits certain “symptoms” may be possessed by vampire spirits have been misrepresented by the groups.She says that a child under the age of two who is “possessed with black, red and vampire witchcraft spirits” can be identified by features such as s/he “screams at night, cries, is always feverish, suddenly deteriorates in health, puts up an attitude of fear, and may not feed very well,” adding that “children who stamp their feet may be “trying to make signs… to communicate with gnomes, the witchcraft spirit in charge of the earth.”

The preacher, who calls herself "Lady Apostle", is threatening to sue a number of organisations, including the British Humanist Association (BHA) and the Witchcraft and Human Rights Information Network (WHRIN), for half a billion pounds in total.

She is accusing them of defamation, in part due to a difference in wording. Campaigners have accused Mrs Ukpabio of child abuse  in her book Unveiling the Mysteries of Witchcraft, of writing “a child under two years of age that cries at night and deteriorates in health is an agent of Satan”.
But according to her solicitors, her actual words describe how such children can be possessed by “vampire witchcraft spirits” with signs of these being a child who “screams at night, cries, is always feverish, suddenly deteriorates in health, puts up an attitude of fear, and may not feed very well”.
Andrew Copson, BHA chief executive, commented: “The fact that she is threatening to launch a legal claim for half a billion pounds over an alleged distinction between being accused of exorcising "Satan" or "Vampires" tells you all you need to know about Ms Ukpabio.”
He added: “Given her baseless identification of features of "possessed children" and her dangerous and irresponsible teachings we feel a strong moral duty to point this out and will not be deflected by libel suits from wealthy "witch-finders".
In a letter sent to the BHA’s lawyers last Thursday, solicitors acting for the controversial preacher accused the charity of causing “members of the public to regard our client as an evil woman” with the damage to her reputation resulting in a “huge loss of incomes to her churches”.
The letter, from London-based Graceland Solicitors, claims Mrs Ukpadio is “a Christian leader of international repute known and respected in many countries of the world”.The Christian Preacher is known for "deliverance sessions" to free children and adults from being possessed (The New York Times)
Yet the Home Office recently revoked her visa after calls from campaigners earlier this year that she be banned from Britain on child protection grounds. It came after she held a number of services during a visit to London in April.
Media lawyer Mark Stephens CBE of HowardKennedyFSI, who is acting for BHA and WHRIN, said: “We must remain ever vigilant of the danger of persecution of innocent children – babies, even – being branded as witches by latter-day self-styled witch-finders with perverse and pernicious views.” He added: “Freedom of speech is at its most precious when it permits voices to be raised against such evil. British libel laws must never be abused to censor matters of such public importance.”
And the concerns of British campaigners are shared by Nobel prize-winning Nigerian author, Professor Wole Soyinka.
“The activities of self-styled exorcists who stigmatize children as witches, vampires or whatever, and subject them to sadistic rites of demonic expulsion, are criminal, and constitute a deep embarrassment to the nation. That their activities are carried out under a religious banner expose them as heartless cynics, playing on the irrational fears of the gullible,” he said.

The Rise Of Religious Desperadoes :Between The Bishop And Wolves

From East to West, South to North, religion is a selling brand. Every nook  and cranny of our country has been  ecorated with litanies of self made  ministries. However, what beggars my imagination is the rate at which every  Tom, Dick and Harry receives a divine mandate from God to win souls for  him, the […]

In his first lengthy papal interview, Pope Francis says bluntly that the church has been too focused on the issues of abortion, gay marriage and contraception and suggests it find a "new balance" to deliver its message.   But he said there should be no retreat from the church's stand on the issues because he […]

The Two Witnesses Of Revelation 11

These Two Will Soon Appear In A Way That Will Shock the Entire World!They Will Testify About The Works Of  Revelation Chapter 12 As Posted At  www.prophecies.org  Revelation 11;5  And if any man will hurt them, fire proceedeth out of their mouth, and devoureth their enemies:Revelation 12;5  And she brought forth a man child, who […]