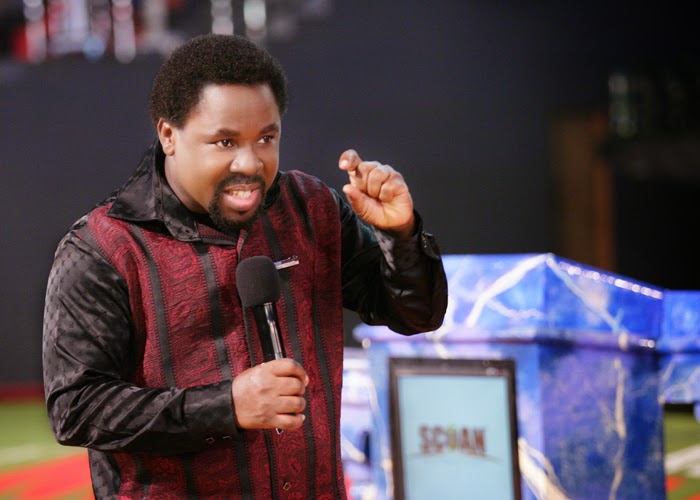 Nigerian Prophet, T.B. Joshua of The Synagogue Church Of All Nations (SCOAN) declared in his church service on Sunday, 17th August, 2014 that the killer disease, Ebola that is currently ravaging West Africa is from ‘the pit of hell’.According to Joshua, who led his congregation in prayer for the nations and individuals affected, time was up for the ‘strange ailment’ and life would soon return to normal for the affected countries.
“The so called strange ailment coming from three nations – Guinea, Sierra Leone, Liberia… satan is the manufacturer, the source,” Joshua defiantly declared to the faithful.“Begin to capture the covenant of that strange sickness,” the cleric then enjoined the congregation.
“Command that strange ailment to come out and go to the pit of hell, in the name of Jesus Christ!”“Because of Christ, people of Liberia, Sierra Leona, Guinea, you are released,” Joshua bellowed, accompanied by the vibrant congregants in a service allegedly viewed by millions worldwide through Joshua’s Christian television station, Emmanuel TV.The controversial Pastor boldly declared that God had spoken to him to pray for the nations affected by Ebola as its reign of fear was close to closure.The Pastor cited to be one of Africa’s most influential individuals, decried the toll Ebola had taken on society, especially in the areas of kinship and kindness.“People are no longer their brother’s keepers because of this strange disease,” he lamented, adding that if someone publicly collapsed from any form of sickness, people would likely abandon the invalid as opposed to lending a helping hand.“Once satan takes love out of people, he has taken life. Satan is not happy that we are one; he is against oneness. He knows when we are not one, we can be defeated,” he fumed.
“The weapon satan is afraid of is love,” Joshua continued.“Satan can fight anything but he cannot fight love.”
The cleric then cited a poignant question asked by Jesus in Luke 18:8: “When the Son of Man comes, will he find faith on the earth?”He added that the prayer Jesus offered for His followers’ faith not to fail indicated that challenges would arise in the last days which would make many ‘abandon their faith’, Ebola being one of such challenge.Joshua made headlines this week in local and international media for sending 4,000 bottles of ‘Anointing Water’ to the Ebola stricken nation of Sierra Leone on the request of the government, alongside $50,000 in humanitarian aid.Last week, Joshua had to debunk a rumour attributed to him that went viral in Nigeria claiming that bathing in salt water would prevent the disease. With over 1.2million followers on Facebook and 90,000 YouTube subscribers, it is easy to understand that he is touted to be among Africa’s most influential individuals.

Catholic Archbishop of Lagos, Most Rev. Alfred Adewale Martins Thursday urged the Federal Government to tackle insecurity in the country and ensure a lasting peace, reports OLAYINKA LATONA. Speaking at a Chrism Mass held at Holy Cross Cathedral, Lagos, the Archbishop said government at all levels should be more serious in arresting the security challenge […]

Bishop David Oyedepo says poverty is not of God.  He insists a child of God has no business being poor and declares: “There’s a proven covenant cure for poverty.”  If this were true and proven, all the world’s poor would have become rich Christians by now. Let us juxtapose the bishop’s enticing words with the […]

The Self-actualization of the Individual

An Expose of Dialectical Existentialism: The Self-actualization of the Individual Inherent in the vast array of philosophical systems is the idea of a paradigm shift according to Thomas Kuhn. The evolution of a particular paradigm and its inadequacies brings about crisis and then emerge revolution to give rise to a new paradigm. There is […]