There seems to be a very big storm brewing within Christ Embassy Church. Earlier on in January this year, there was news that popular man of God, who also serves as the President of Believers' Love World Incorporated aka Christ Embassy, Pastor Chris Oyakhilome has relocated to Johannesburg in South Africa. While his wife is based in the UK.

According to sources close to the stylish and urbane pastor, he had relocated to South Africa ‘to further spread the gospel of Christ and win more souls for the Kingdom of God.’ That this was an agreement reached by the couple and it does not affect their relationship contrary to some media reports sometime ago that they were about to divorce. A source had said:

You know they are both servants of God and it would be counter-productive for them to stay in one country as this would not help the spread of the gospel. That was why they agreed to stay in different countries so that they could get across to as many people as possible in their different locations and the feedback has been great”.

But according to posts made on a new Facebook page created by some concerned Christ Embassy members, there's more to Pastors Chris & Anita separation and living in 2 countries!
They say Pastor Chris, recently, has never been never spotted with his wife by his side – not during ministry conferences, not during conferences by other ministers and NEVER during the monthly communion service transmitted live from a TV studio.
Meanwhile other high ranking women in the ministry close to Pastor. Chris always travel with him and are seen around him. That Rev Anita has not been seen in church since January 2014 and Pastor Chris does not find it fit to address his congregation who support him with so much money.


The Facebook page was created on May 10th and the page admin swears their sole objective is not to cast doubts, spread false stories about the Pastors of God but that this is a Call to Prayer for all believers who understand God's heart concerning marriage and a Call to Action for Pastor Chris to do what he preaches! 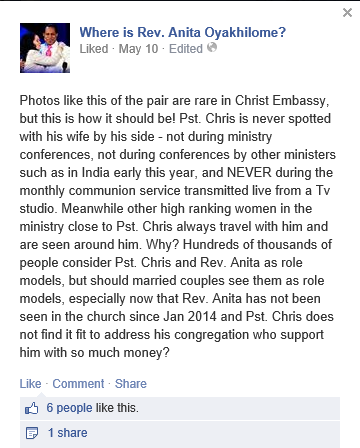 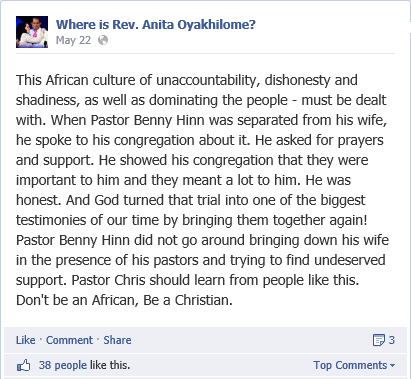 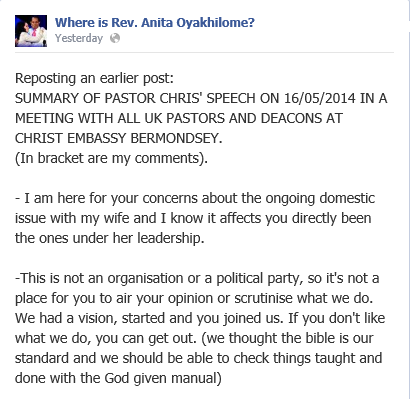 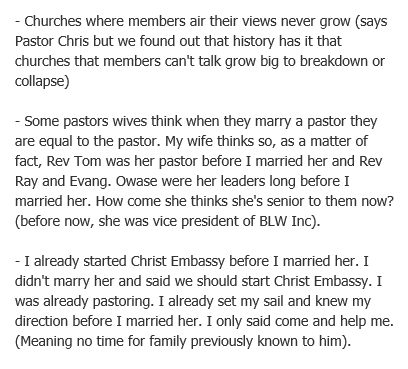 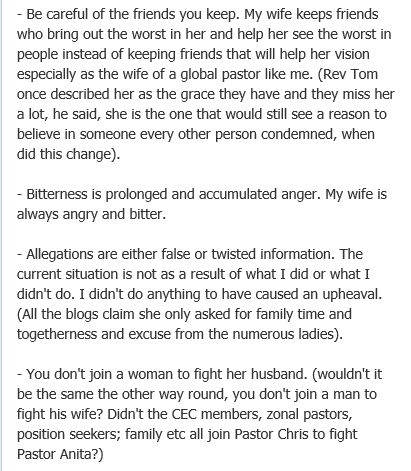 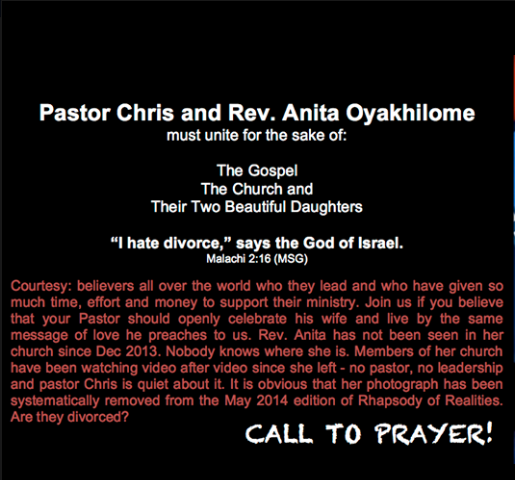 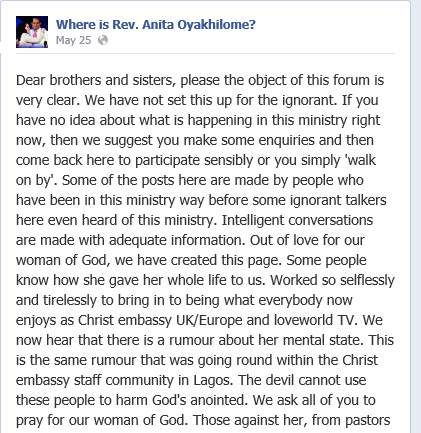 WARNING GRAPHIC, RAW PHOTOS — ISIS on Christians: ‘There is nothing to give them but the sword’

LOS ANGELES, CA (Catholic Online) – Although Christians have lived in northern Iraq and Syria for nearly two-thousand years, and at least six hundred years before Islam, today they face extinction across the region. "Our people are disappearing," Canon Andrew White, head of the Anglican Church in Iraq "It looks as though the end could […]

This paper looked at contending creation myths and concluded that they are unsatisfactory to pure reason; it presented a synthesis that it says could meet peopleâ€™s yearning for a universal creation story that unified them, gave them a sense of connectedness and oneness, which it says is a critical condition for human beings to feel […]