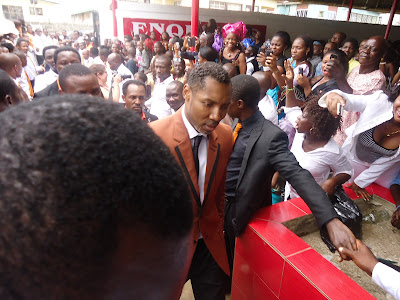 The Lagos State Directorate of Public Prosecutions (DPP) has absolved the founder of Perfect Christianity Mission, Pastor Sign Fireman, of complicity in the murder of a 12-year-old girl.

Fireman was absolved in a legal advice by the DPP to the Deputy Commissioner of Police, State Criminal
Investigations Department, M.A.K. Smith Street, Yaba.

The advice was dated 27 February and was signed by Ms Olayide Eboda on behalf of the Lagos State Attorney General and Commissioner for Justice, Mr Ade Ipaye.

The 12 year old girl, Ogoja was allegedly strangled to death by one Ikechukwu Egbo in Badagry, Lagos State on Dec. 31, 2013.

Egbo had in a confessional statement claimed that it was Fireman, who asked him to murder the girl and obtain her excreta for a N100, 000 reward.

However, the DPP cleared Fireman of the crime after the conclusion of Police investigations into the incident, while Egbo was found culpable.

The DPP said the facts in the file revealed that the suspect tricked the deceased to an uncompleted building and strangled her.

â€œThe suspect claimed he was asked to strangle a young girl and bring her excreta.

â€œHe intended to kill the girl and he carried out his intention, but was out of luck as he was apprehended by the security guards in the building where the incident occurred.

â€œAfter a careful consideration of the facts contained in the duplicate file, this office is of the opinion that a prima facie case of murder is established against the primary suspect (Egbo) only.

â€œIn view of the foregoing, this office shall prosecute Egbo at the state high court for the offence of murder.

â€œOn the other hand, the second suspect (Fireman) is to be released forthwith if he is still in custody as no case is established against him,â€ the DPP stated.

Firemanâ€™s counsel, Mr Peter Oboyi, told newsmen on Friday that the exoneration of his client had shown clearly that Egbo had lied against him.

Oboyi said in the course of investigations by the police it was discovered that Egbo was not close to Fireman as he claimed.

He said the young boy could not identify the street, number and color of the house of the cleric whom he had claimed to be working for or familiar with.

In his reaction, Fireman said the DPPâ€™s advice was not unexpected because he knew nothing about the murder.

The cleric told newsmen that he would not file any suit against the police over his arrest, adding that they were only doing their job as law enforcement agents.

He said:â€œThis incident is the handiwork of some people who are not happy with the successes being made by our ministry.

â€œWe started this ministry in 2009 with only four persons, but today we have over 100 branches with about 60 in Lagos.â€

China To Pope Francis: Don’t â€˜Interfere’ With Our Country’s Religion

VATICAN CITY (RNS) China has reacted cautiously to a bid by Pope Francis to open new dialogue with Beijing, with some officials quick to warn the Vatican not to “interfere” with the country’s religion. On his return flight from a five-day tour of South Korea, Francis said he was ready to go to China — […]

NIGERIA: Jesus Did Not Die on the Cross. He Was In a Coma – Sheikh Ahmad Abubakar Gumi

Respected Islamic Cleric, Sheikh Ahmad Abubakar Gumi has sensationally asserted that Jesus Christ did not die on the cross and there was therefore no basis for Christians to celebrate Easter. According to Gumi, Jesus was only comatose. Gumi made this postulation on his facebook page on a post titled 'Easter Musings'. "One of the soldiers […]

JESUS THE ONLY MESSIAH

Jesus left no one in doubt he is the Messiah.  He demonstrated it repeatedly beyond reasonable doubt.       Did the wicked pastors, bishops and general overseers who conspired to have Jesus crucified really know he is the Messiah?  Yes they did.  Would they in their right minds dare to kill the son of God?  […]