VATICAN CITY (AP) â€” In an unprecedented blending of papacies past, present and future, retired Pope Benedict XVI joined Pope Francis at a ceremony Saturday to formally install new cardinals who will one day elect their successor.

It was the first time Benedict and Francis have appeared together at a public liturgical ceremony since Benedict retired a year ago, becoming the first pope to step down in more than 600 years. It may signal that after a year of staying “hidden from the world,” Benedict may occasionally be reintegrated into the public life of the church.

Benedict entered St. Peter’s Basilica discreetly from a side entrance surrounded by a small entourage and was greeted with applause and tears from the stunned people in the pews. He smiled, waved and seemed genuinely happy to be there, taking his seat in the front row, off to the side, alongside the red-draped cardinals.

“We are grateful for your presence here among us,” newly minted Cardinal Pietro Parolin, the Vatican secretary of state, told Benedict in his introductory remarks.

Francis warmly greeted his predecessor at the start and end of the service, clasping him by his shoulders and embracing him. Benedict removed his white skullcap in a show of respect as Francis approached.

But in a sign that Benedict still commands the honor and respect owed a pope, each of the 19 new cardinals â€” after receiving his red hat from Francis at the altar â€” went directly to Benedict’s seat to greet him before then exchanging a sign of peace with the other cardinals. 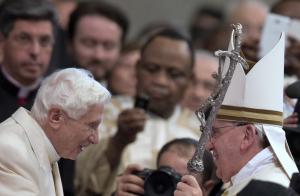 Pope Emeritus Benedict XVI is greeted by Pope Francis at the end of a consistory inside the St. Pete â€¦

They had, however, already pledged their fidelity to Francis in an oath of obedience.

Saturday’s surprise event was the latest in the evolving reality for the church of having two popes living side-by-side in the Vatican. Over the summer, Francis and Benedict appeared together in the Vatican gardens for a ceremony to unveil a statue. But Saturday’s event was something else entirely, a liturgical service inside St. Peter’s Basilica marking one of the most important things a pope can do: create new cardinals.

Benedict had no formal role whatsoever in the ceremony, but his presence could signal a new phase in his cloistered retirement that began with his Feb. 28, 2013, resignation. Chances are increasing that Benedict might also appear at the April 27 canonization of his predecessor, John Paul II, and Pope John XXIII.

The Rev. Robert Wister, a professor of church history at Seton Hall University, stressed that while it was a unique moment, Benedict was certainly present for the ceremony at Francis’ invitation and that Francis was the only actual pope in the basilica elevating cardinals.

He said he didn’t think Benedict would gradually return to any major ceremonial role in the church, both because his 86 years make it increasingly difficult for him to get through long services and because doing so would be “highly problematic, given that some cardinals and Curialists (Vatican bureaucrats) yearn for a return to the ‘good old days.'” 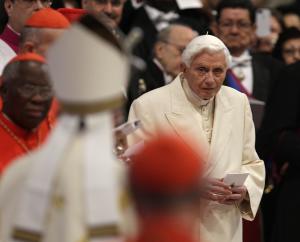 Pope Emeritus Benedict XVI looks at Pope Francis, left with back to camera, arriving as he attends a â€¦

Nevertheless, Wister said he thought it was likely Benedict would attend the April canonizations, when two living popes would be honoring two dead ones.

Benedict’s decision to appear at the consistory could also be seen as a blessing of sorts for the 19 men Francis had chosen to join the College of Cardinals, the elite group of churchmen whose primary job is to elect a pope.

Francis’ choices largely reflected his view that the church must minister to the peripheries and be a place of welcome and mercy, not a closed institution of rules. In addition to a few Vatican bureaucrats, he named like-minded cardinals from some of the poorest places on Earth, Haiti, Burkina Faso and Ivory Coast among them.

In his remarks, Francis told the new cardinals that the church needs their courage, prayer and compassion “especially at this time of pain and suffering for so many countries throughout the world.”

“The church needs us also to be peacemakers, building peace by our works, our hopes and our prayers,” he said. 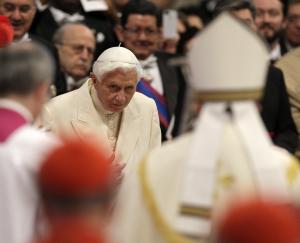 Pope Emeritus Benedict XVI bows as Pope Francis, right with back to camera, arrives for a consistory â€¦

Two of the new cardinals hail from Africa, two from Asia and six from Francis’ native Latin America, which is home to nearly half the world’s Catholics but is grossly underrepresented in the church’s hierarchy.

There’s Cardinal Chibly Langlois, who isn’t even an archbishop but rather the 55-year-old bishop of Les Cayes and now Haiti’s first-ever cardinal.

The archbishop of Managua, Nicaragua, Leopoldo Jose Brenes Solorzano, is an old friend who worked alongside the former Cardinal Jorge Mario Bergoglio in preparing the seminal document of the pope’s vision of a missionary church â€” the so-called Aparecida Document produced by the 2007 summit of Latin American bishops.

Cardinal Andrew Yeom Soo-jung, archbishop of Seoul, South Korea, has serious Catholic chops: His ancestors were among the lay people who brought Christianity to the Korean peninsula in the 19th century, and his great-great grandfather and his wife were executed as part of the Joseon Dynasty’s persecution of Christians, the Asian Catholic news agency UCANews reported. Of the six children in his immediate family, three became priests.

Though he hails from Burkina Faso, Cardinal Philippe Nakellentuba Ouedraogo sounded an awful lot like the Argentine Francis in his 2013 Christmas homily. He denounced the “inequality, injustice, poverty and misery” of today’s society where employers exploit their workers and the powerful few have most of the money while the poor masses suffer.

One cardinal sat out the ceremony even as he made history by living to see it: Cardinal Loris Francesco Capovilla, aged 98, became the oldest member of the College of Cardinals, but due to his age couldn’t make the trip from northern Italy. His was a sentimental choice for Francis: For over a decade, Capovilla was the private secretary to Pope John XXIII, whom Francis will make a saint alongside Pope John Paul II in a sign of his admiration for the pope who convened the Second Vatican Council.

Capovilla, and the emeritus archbishops of Pamplona, Spain and Castries, St. Lucia are all over age 80 and thus ineligible to vote in a conclave to elect Francis’ successor.

Trouble looms in Assemblies of God

Assemblies of God Church Nigeria General Superintendent, Rev. Paul Emeka, suspended over allegations of misconduct,  financial misappropriation and other matters by a  group in the church, in this interview, fires  back at his accusers, saying his only offence was that he  tried to protect the church. The embattled Rev. Emeka  was  reinstated by a court […]

Shall I Tell the Pope? (A Short Story)

The first time Father Paul asked me to follow him to Bishop Shanahan Lodge after Sunday Mass, my right leg entangled with my left and I tripped. He stretched his long arms and caught me before I could reach the red soil of Nnobi. A wide smile on his face wiped off my embarrassment. As […]