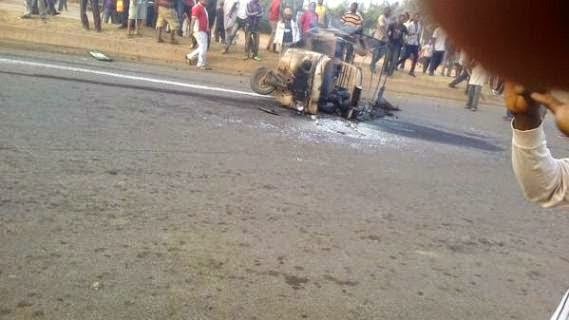 According to an eyewitness, the incident happened early this morning at Gudu roundabout in Abuja. He said policemen in their van were chasing a Keke driver and during the chase, the Keke tumbled and caught fire.

The only passenger in the Keke managed to escape unhurt but the driver wasn't so lucky.

He said seeing the Keke and driver on fire, the police quickly left the scene, leaving the man to burn to death. He said this enraged other Keke drivers and some people who witnessed the incident and they began to protest.

He said it took the intervention of military men to disperse the protesters. More photos below…

I killed my neighbour in self defence — murder suspect Anthony Ogboru

Never in the wildest imagination of 29-year-old Anthony Ogboru did he envisage to spend the just celebrated Christmas and New Year behind the counter, let alone to end up in one of the prisons in Lagos, for as long as the courts ruled!

This security advisory was sent out to expatriates who work in oil companies in Lagos. But foreigners aren't the only ones being abducted in Lagos…so decided to share with everyone.  Recently in Lagos State, specifically between February 10 2013 and today, at least 10 confirmed kidnap-for-ransom incidents involving 12 victims have been recorded between Ikoyi, […]

Bauchi—Bauchi State government has attributed its inability to offset the N11 billion backlog of pension and gratuities to dwindling financial resources. The State Head of Service, Adon Dalla Gin, who made this known at a briefing at Government House in Bauchi, said the administration of Governor Isa Yuguda inherited a debt of N600 million pension, […]