Four months ago, Demeteriya Nabire was killed by a crocodile when she went to the lake near her home to fetch water. The animal later came back to the area but found Nabire's husband waiting, ready to take revenge.

Demeteriya Nabire was at the water's edge with a group of women from her village – they were gathering water from Uganda's Lake Kyoga when the crocodile grabbed her. It dragged her away and she was never seen again.

Her husband, Mubarak Batambuze, was devastated – Nabire was pregnant when she died, and he had lost not only his wife but an unborn child as well. He felt powerless. But then last month he heard the crocodile had returned.

"Somebody called me and said, 'Mubarak, I have news for you – the crocodile that took your wife is here – we are looking at it now.'"

The 50-year-old fisherman made his way to the lake with some friends. "He was a very big monster, and we tried fighting him with stones and sticks. But there was nothing we could do," he says.

So Batambuze went to visit the local blacksmith.

"I explained to him that I was fighting a beast that had snatched and killed my wife and unborn baby. I really wanted my revenge, and asked the blacksmith to make me a spear that could kill the crocodile dead. 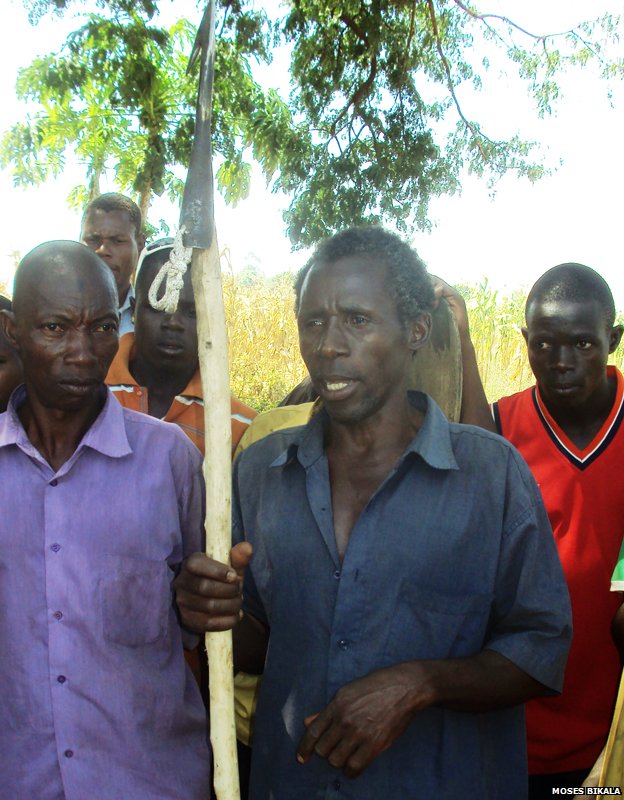 Mubarak Batambuze with the spear he ordered from the blacksmith

"The Blacksmith asked me for Â£3.20 ($5) and made the spear for me," he says. It was a significant amount of money for Batambuze, but he was determined to kill the animal that had snatched his future.

"The crocodile ate my wife entirely. Nothing was ever seen of her again – no clothes, no part of her body that I could identify. I just didn't know what to do – a mother and her unborn child. It was the end of my world. I was completely lost."

Armed with his new spear – specially designed with a barb on one side – the widower went on the attack.

When he got to the water the crocodile was still there, but Batambuze's friends took fright.

"Please don't attack this beast," they pleaded, "it's so huge it may eat you. The spear is not enough – it won't finish the job."

But Batambuze insisted they stay. "I failed killing it the first time around," he told them, "I'm not bothered if I die killing this beast. I'm going to take it on with this spear, and I will make sure that it dies."

A Ugandan Wildlife Authority ranger, Oswald Tumanya, says the crocodile was more than four metres long and weighed about 600kg.

"I had so much fear in me but what helped me to succeed was the spear," says Batambuze.

He tied a rope to the end of the weapon so that once the tip was embedded in the crocodile, he could pull it out at an angle and the barb would cut into more of the animal's flesh.

"I put the spear into the crocodile's side, and while my friends were helping to throw stones at the beast's back, it tried getting its mouth up to attack me again.

"It turned violent, and then there was so much fear in the place. But I was so determined, and I wasn't afraid of dying. I just wanted it dead, so I put the spear in its side and I pulled the rope. That got the crocodile into trouble."

It took an hour and a half for Batambuze and his friends, fighting and retreating, exchanging attacks with the enraged animal, before the crocodile was finally dead.

Exhausted, they made their way back to their village. "There was so much shock. What really surprised everybody was how big the beast was. It wasn't an ordinary crocodile. It was so big. And people called me and my friends heroes," he says.

The dead animal was taken to Makarere University in Kampala, where it was examined by a vet, Wilfred Emneku.

He says a tibia bone was found inside the crocodile's stomach, but while he believes it's human he can't be sure.

A crocodile expert at Charles Darwin University in Australia, Adam Britton, says he would be very surprised if any remains inside the animal's stomach were those of Demeteriya Nabire.

"After 12 weeks… under normal conditions, it would be highly improbable for bones from the same meal to remain in the stomach," he says.

So while Batambuze's celebrity status endures in his village, it is unlikely that he will ever have a grave to mourn at.

"Within myself I'm a very depressed man because I lost a wife and an unborn child," he explains.

"But the locals keep on saying, 'Thank you for killing the beast, that's where we fetch water and we're sure it would have taken somebody else. Thank you so much, you did a great job.'"

"So I'm a local hero – people keep on thanking me."

Mubarak Batambuze spoke to Outlook on the BBC World Service. Listen again on iPlayer or get the Outlook podcast.

IN the recently concluded campaign for re-election, Barack Obama posted more than 250 videos on Youtube. He was not using Youtube to broadcast his material. Rather, he would link these videos in emails that followed. Thus, in targeting up to one hundred micro groups throughout the country Barack Obama was able to ensure that minority […]

Faced with a bleak prospect of having no cogent and verifiable evidence of having held elections in Rivers State last March 28 and April 11, the Independent National Electoral Commission [INEC], in collusion with the PDP, has now decided to cause further confusion by deliberately mixing up sensitive materials to make it difficult for inspection […]