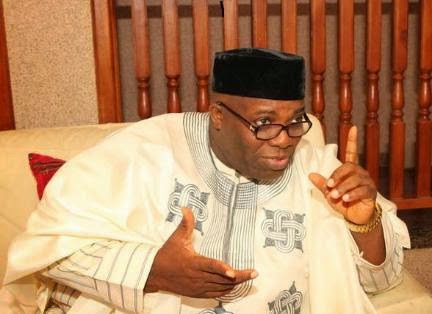 Senior Special Assistant on Public Affairs to President Goodluck Jonathan, Doyin Okupe has launched a massive attack on Buhari.Okupe described the All Progressives Congress presidential candidate, Muhammadu Buhari as incompetent Intellectually Backward.This and more were contained in a post he put up on his facebook wall this afternoon.Buhari will not debate anywhere. Reason:All the organisers are compromised according to him.So what will they do? He believes all the organisers are so corrupted that he and his team suspect they may give President Jonathan the questions before time. If that is their problem there is a simple solution. Meet wt organisers and request that all quetions except follow ups be given to all candidates Prior to the debate.However watching his perfomance on channels this morning at the, hurriedly put together, meeting with business community in lagos, the reason for the rejection for a proper debate become too clear.General Buhari unarguably has little mental capacity, extreemly superficial if not pedestrian Understanding of good governance and embarrassing achaic knowlegde of developmental economics.

Apart from the obvious choreography employed throughout the 40mins discussion it was impossible for an informed and impartial observer to go away with anything.There were no policy statesments, No insight into any directions their government will be going. Nothing to compare with what is in place now. Lowest point was Buhari’s mundane and unintelligent response to the very cogent question raised by foluso phillips, chairman NESG.No one in his right sense will expect much from a 40min dialogue with the lagos business group but Nobody also would have expected such an abysmally poor and shallow performance from a man who hopes to govern Nigeria in 2015. Rising through the ranks in the Army may give a man a school certificate status but the basic intellectual backwardness and restricted exposure will pose a serious challenge when high level cerebral perfomance is required as it will be for an occupant of the seat of the President.This is not the first time, Doyin Okupe would attack the credibility of the APC, he had earlier said that he doesn’t see the APC lasting more than a year.

Its 490 B.C. Athens is at war with Persia. Athens dispatches its fastest runner, 25-year old Pheidippidies to Sparta, to summon military help. Pheidippidies ran the 150 miles from Marathon to Sparta on foot in two days, ran back and dropped dead! The modern Marathon is run in remembrance of Pheidippidis, to honour the supreme […]

The Rivers State Chapter of All Progressives Congress, APC, and a cross section of Rivers people received with shock the news that the Rivers State House of Assembly [RSHA] received and passed a N307 billion 2016 budget proposal by Governor Nyesom Wike administration under 24 hours of presentation by the governor. The APC believes that […]

ABUJA—A GROUP of Northern Pro-democracy activists, the Northern Coalition for Democracy and Justice, NCDJ, has called on government of the United States of America to facilitate the trial of the All Progressives Congress, APC, Presidential Candidate, Major-General Muhammadu Buhari (retd) for his role in the post-election violence of 2011. In a letter to United States […]