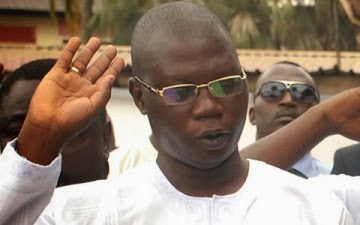 Factional leader of the Yoruba group, Oodua People’s Congress (OPC), Ganiyu Adams,claims the presidential candidate of the All Progressives Congress (APC), Gen. Muhammadu Buhari (rtd.) will not be getting a bloc vote from the South-west in the February 14 presidential election.

Adams is reported to have said a good number of the Yoruba people are yet to get over their reservations with the Fulani.Daily Posts reports that Adams told Nigeria Today that he does not agree with projections made by some pundits that Buhari will make a clean sweep of South-west by virtue of the dominance of his party in the geo-political zone, saying, “South-west is a place that you cannot use the media to deceive.

We are highly exposed and highly educated.”“For you to say we should go one way, it is impossible. I don’t think that the South-west will vote for Buhari en mass. Don’t forget the pain caused by the June 12 annulment, it is still fresh in the mind of our people many died in the cause of June 12 struggle, many lost a lot of properties. I don’t think our people will trust a Hausa/Fulani man from the north this time around.” the OPC leader is quoted as saying by Daily Trust Although Adams was quick to point out that Jonathan alone should not be blamed for the nation’s failing. He insisted that governors and lawmakers should equally share in the blame.

78% of Nigerians buy petrol above N97 per litre â€”Survey

ABUJA — Opinion poll conducted by an independent firm, the NOIPoll Limited, has revealed that over 78 per cent of Nigerians bought petrol above the official pump price of N97 per litre between January and March, 2014. Black market thrives as fuel scarcity hits Lagos. Photo: Bunmi Azeez It said the results of the petrol […]

Let Wike begin the cleansing in his government– Rivers APC

The All Progressives Congress, APC, Rivers State Chapter has congratulated Governor Nyesom Wike for finally accepting the need to rid Rivers State of kidnappers and armed criminal gangs. The party in a statement signed by it spokesman, Chris Finebone said, “This follows the governor’s reported readiness to seek an amendment to the existing law on […]