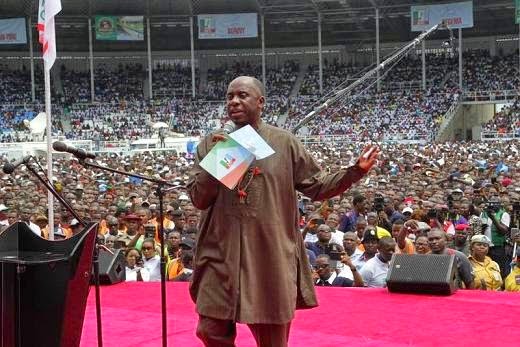 Governor Rotimi Amaechi today while addressing a huge crowd of supporters in the ancient city of Aba, stated that he was of the Igbo stock and was proud of it.

In his statement, he was quoted as saying, "Abu m onye Igbo, a bonafide Igbo man". "My name is Amaechi but President Jonathan who says his name is Azikiwe cannot speak Igbo." "If he says his name is Ebele, then let him speak Igbo". He further urged the Abia people to vote for Buhari as he was the change they seek.

Earlier, Buhari was honoured in the palace of Enyi Aba, with the title of Ogbuagu 1 of Aba.

THE cold war between the former Governor of Oyo State, Otunba Adebayo Alao-Akala and Senator Hosea Agboola, the senator representing Oyo North has deepened with the latter and his community taking the ex-governor up over a statement that the senator had no electoral value. The two parted ways immediately after the tenure of Akala. Agboola […]

The Rivers State Chapter of the All Progressives Congress (APC) has reprimanded the Resident Electoral Commissioner (REC), Mrs. Gesila Khan, for blocking the party from having access to evidence of monumental rigging of the March 28 and April 11 elections in the State with a view to seeking redress at the Election Petition Tribunal. “We […]

Impeachment: Blame yourself, not others, Umahi tells Elechi

ABAKALIKI—THE governorship candidate of Peoples Democratic Party, PDP, In Ebonyi State, Engr. Dave Umahi, weekend enjoined Governor Martin Elechi to stop pointing accusing fingers at prominent sons of the state, including the Secretary to the Government of the Federation, SGF, Senator Anyim Pius Anyim and Chief Fidelis Nwankwo over the impeachment notice served him by […]