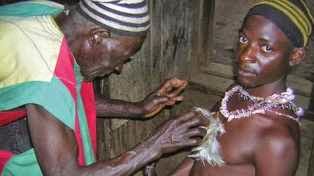 Pandemonium broke out in the Asipa community as an apprentice bricklayer, identified as Rasheed Sulaiman, was shot dead while testing the potency of a bullet-proof charm given to him by a herbalist.A resident of Asipa, a community in the Ife North Local Government Area, told PUNCH Metrothat Sulaiman, on Saturday called his cousin, Siji, to follow him to a secluded place to test the charm.

Sulaiman wore the amulet and gave a gun to his cousin to fire at him. The cousin fired the shot and killed Sulaiman instantly.Residents were unaware of the mission of duo, but the sound of a gunshot was said to have attracted attention of the people of the area to where the incident happened. Siji was said to be found weepingbeside the body of the deceased. Siji reportedly explained that the deceased compelled him to shoot at him to test the potency of an amulet.

It was gathered that the deceased, who was known to be a tough guy, could be preparing to use the charm for the governorship election in the state. The incident was said to have triggered panic among the elders of the community who believed that some other youths might have similar charms.Punch reports the Police Public Relations Officer, PPRO, of Osun state Police Command, Folasade Odoro, could not be reached to react to the incident.

LAGOS—The acting Managing Director of the Nigerian Aviation Handling Company, NAHCO, Plc, Mr. Nobert Bielderman, Monday, said that the postponement of the 2015 general elections for six weeks by the Independent National Electoral Commission, INEC, will have an adverse impact on the Nigerian economy to the tune of $2bn (over N400bn) loss. File: Voter casting […]

Buhari and the fallacy of change

Those that parade themselves as true nationalist and patriot understand that there is no price too high ( and I add: nor low) to pay for the survival of the peace, stability and progress of their country.” — The words of a great patriot and concerned Nigerian citizen. WHAT IS CHANGE? Attention, innovation, transformation, modification, […]