IN January 2000, the news was awash with  reports of two doctors who mistakenly removed a patient’s only working kidney. The septuagenarian underwent what should have been a right nephrectomy at a hospital in South Wales, but it was his left kidney that was removed in error.

On discovering their mistake, the doctors carried out further surgery in an attempt to restore function to the chronically diseased right kidney but failed, and the patient died five weeks later.

Similarly, eight years later in 2008, doctors at a Minnesota, mistakenly removed a cancer patient’s only healthy kidney believing it had a cancerous tumour.

The tragic error was only discovered  the next day when the pathologist examined the material and found no evidence of any malignancy. 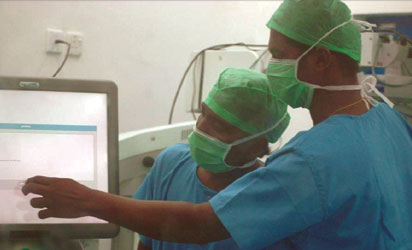 Similar cases bound of errorneous and unnnecessary removal of patients’ kidneys in hospitals.

But a new international study indicates that approximately one of every five individuals with kidney tumours common in patients with tuberous sclerosis complex (TSC), a genetic disorder, has had a kidney removed, while 40 percent had some kind of surgical procedure performed.

According to the study published in The Lancet , proper diagnosis could have led to treatment that would have made surgery or kidney removal unnecessary.

Essentially, kidney removal, or nephrectomy, is surgery to remove all or part of a kidney.

“I can’t tell you how many times I’ve heard from patients who say their doctors told them a kidney looks bad, is full of tumorus, isn’t working and has to come out,” said Dr. John Bissler, a nephrologist and Co-director of the the Tuberous Sclerosis Clinic at Cincinnati Children’s Hospital Medical Center,

“But you can do studies on these patients and find out that they have normal kidney function. The kidney looks bad, but it works. Doctors are unfamiliar with tuberous sclerosis, so when they see tumours, they think it’s renal cell carcinoma, perform surgeries trying to help, but before long the kidney is gone. This approach is unnecessary. Fortunately, many people come to us from around the world for a second opinion.”

In TSC, it is common for tumours to grow on vital organs. As many as 80 percent of TSC patients have these tumours, called angiomyolipomas, or AMLs.

For years, the primary treatment for angiomyolipomas was arterial embolization, which uses a catheter to block the artery and stop blood flow to the tumor. Embolization, however, can also damage healthy tissue.

London –  Eating at least seven portions of fruit and vegetables every day is healthier than the publicised â€œfive a dayâ€ and will make people live longer, according to a new research finding. The Britainâ€™s National Health Service had recommended that every person in Britain should try to have five different 80 gramme portions of […]

Calcium and cancer In order for blood to retain oxygen, it must also remain alkaline. Diet is critical to this process as minerals and nutrients such as calcium that help the blood to remain alkaline are typically obtained through the food we eat. If our diet is lacking in these essential nutrients, it will be […]

HOPKINS, Minn. — A Dairy Queen manager who came to the aid of a visually impaired customer is receiving Internet and social media praise for his heroic actions.   Joey Prusak said on Sept. 10 one of his regular customers came in to order a sundae. While paying, the visually impaired man dropped some of […]