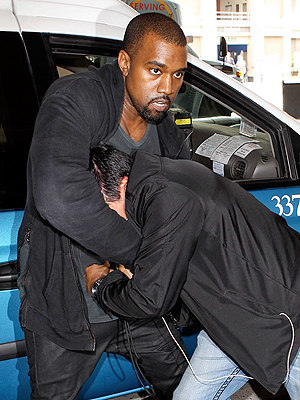 New dad Kanye West may be in trouble with the law.

The altercation, caught on camera and posted on TMZ, took place after Ramos filmed the rapper and asked him questions as he walked out of the airport to a waiting car.

At one point in the video, an irritated West, 36, breaks his silence and accuses the paparazzo of trying to provoke him. "You're trying to get me in trouble so I have to pay you, like, $250,000," West says in the footage. He then appears to lunge at Ramos.

"Kanye hates when the paparazzi speaks to him," a photographer source tells PEOPLE. "He got very annoyed with the videographer and lost it."

According to police Sergeant Belinda L. Nettles, paramedics responded and transported Ramos to a local hospital for medical attention. The extent of his injuries is unknown.

"A police report was taken by the Los Angeles Police Department and the investigation is ongoing," Nettles said in a statement to PEOPLE.

Although TMZ reports that police will refer the case to the D.A. as a felony attempted robbery (a more serious charge) rather than a battery case, Officer Sara Faden tells PEOPLE, "We can confirm that our detectives are handling the case, however, we're not sure if a misdemeanor or felony charge will be filed. The charge will determine if it goes to the City Attorney or D.A.'s office."

Ramos is no stranger to quarreling with celebrities. In 2007 Britney Spears bashed his SUV with an umbrella after he pursued and photographed her.

America's fascination with legendary pilot Amelia Earhart is never-ending. Her flying accomplishments and her baffling disappearance have intrigued Americans for nearly 80 years.   She was the first female pilot to fly solo across the Atlantic Ocean, a feat she accomplished in 1932 before demolishing other flying records and writing best sellers about her adventures. […]

New Jersey teen gets 17 years in prison for killing girl

WOODBURY, N.J. (AP) — A New Jersey teenager called his actions "a big mistake" as he was sentenced Thursday to 17 years in state prison for fatally strangling a 12-year-old girl whom he had lured to his home with an offer to trade bicycle parts.   Justin Robinson, now 16, pleaded guilty last month to […]