A Suffolk County jury on Saturday night found a black man guilty of manslaughter for shooting of an unarmed white teenager outside the man’s house last year, ending a racially charged trial. 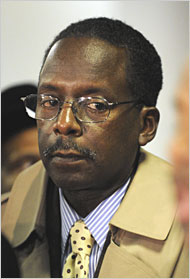 John White after he was convicted on Saturday night.

The jury began deliberating on Wednesday, and on Friday indicated that it was deadlocked and racked with discord. But late Saturday night, it delivered its verdict: The man, John H. White, 54, was guilty of the second-degree manslaughter charge that prosecutors had sought, and of criminal possession of a weapon. Mr. White was allowed to remain free until sentencing, when he will face a maximum term of 5 to 15 years in prison.

Mr. White was convicted of shooting Daniel Cicciaro, 17, point-blank in the face on Aug. 9, 2006. Daniel and several friends had left a party and showed up Mr. White’s house just after 11 p.m. to challenge his son Aaron, then 19, to a fight, and had used threats, profanities and racial epithets. Mr. White awoke and grabbed a loaded Beretta pistol he kept in the garage of his house in Miller Place, a predominantly white hamlet on Long Island.

“We are elated and relieved and feel that Daniel has been vindicated and that justice has been served,” said Gregg Sarra, a longtime friend of the Cicciaro family and Daniel’s godfather.

“This situation was never about race, and we hope this verdict finally dispels the notion that any racism was involved,” he said. “The defense wanted to play the race card, and there was nothing there and the jury saw through that.”

After the verdict was delivered, the victim’s parents, Daniel and Joanne Cicciaro, hugged friends and relatives and walked out of the courtroom. Mr. Cicciaro raised his fist in the air and said, “Yeah, go Dano,” and Ms. Cicciaro said, “I love you, Daniel.”

The trial’s racial overtones were obvious from the start, suggesting that the tension associated with the Deep South was alive in a New York suburb with good schools, high property values and privileged children.

The courtroom gallery during the four-week trial was often clearly divided, with blacks seated on one side and whites on the other. Each family was buffered by intimidating groups: the White family by members of the Nation of Islam and the Cicciaros by burly men with shaved heads and biker clothing.

Mr. White testified that Aaron woke him from a deep sleep the night of the shooting, yelling that that “some kids are coming here to kill me.” Mr. White said he considered the angry teenagers a “lynch mob.”

He said their racist language recalled the hatred he saw as a child visiting the segregated Deep South and stories of his grandfather’s being chased out of Alabama in the 1920s by the Ku Klux Klan.

Mr. White testified that his grandfather taught him how to shoot and bequeathed him the pistol he used.

A lawyer for Mr. White, Frederick K. Brewington, insisted in his summation that this was a “modern-day lynch mob” and that Mr. White considered it “history replaying itself.”

“Race has so much to do with this case, ladies and gentlemen, that it is painful,” Mr. Brewington said. He told the jury that to convict Mr. White would betray advances in civil rights.

Mr. Brewington said the verdict “indicates a mindset that says, ‘We’re O.K. with what happened.’” He said the jury failed to take into account that “John White and his family were scared to death.”

The lead prosecutor, James Chalifoux, said the trial did not hinge on race, but rather on the rash actions of a quick-tempered man who kept an arsenal in his house in preparation for such a situation. Mr. White admitted in court that he had not hunted in years and that the Beretta was unlicensed.

Instead of trying to calm the unarmed teenagers, or simply locking his doors and waiting for the police, Mr. White grabbed an unlicensed pistol and stormed out of his house to confront the teenagers, Mr. Chalifoux said.

The prosecutor acknowledged that the teenagers used epithets, but called Mr. White and his lawyers disingenuous in invoking a racial defense, noting that they missed few chances to embellish testimony with inflammatory references, and he said they used the “lynch mob” strategy to distract the jury from the charges.

He cited trial testimony that indicated that Mr. White fanned the gun menacingly at each teenager and that Daniel did not lunge, but rather defiantly slapped the gun away, with Mr. White retraining it on him, then shooting him point-blank in the face.

But Mr. White said the shooting happened accidentally after he began turning to retreat and Daniel lunged at the gun. He testified that he told his wife to call 911.

On Saturday jurors asked for a rereading of the trial testimony of Mr. White, his wife, Sonia, and Aaron. The jurors did not comment after the verdict was read.

Testimony throughout the trial suggested two decent lives colliding in a suburban driveway that night because of an Internet hoax.

Daniel was described as a hard-working, popular teenager who ran his own thriving car repair business. His parents adamantly insisted outside court that their son was not a racist, noting that Ms. Cicciaro is of Puerto Rican heritage, and that he had black friends, including Aaron White.

Daniel apparently believed a false rumor that Aaron was responsible for a message on an Internet chat room that threatened the rape of a girl they all knew. He showed up at the Whites’ house that night to defend the girl’s honor, his parents said, and he crossed paths with Mr. White, a hard-working father of three who had spent a lifetime striving to better his family’s lot by continually moving to better neighborhoods. Mr. White had finally bought his “dream house” in Miller Place in 2005, he testified, where his son could attend a good high school. It was there that Aaron White met Daniel Cicciaro and his friends.

LOS ANGELES (Reuters) – Rapper Kanye West pushes the boundaries of hip hop with his latest album "Yeezus," using aggressive electro-dance music beats to channel his anger and win over critics, who have called the record "daring" and "ambitious."  "Yeezus," the 36-year-old rapper's seventh solo studio album, has also sped to the top of the […]

Codewit.com â€” With their political, intellectual and cultural leadership cadre running around in an uncertain cycle, the Igbo of Nigeria were handed something to cheer about in the far away State of Virginia, United States of America. There, in late September, during a sadly little-publicized ceremony, the authorities of the Frontier Culture Museum of Virginia […]

WASHINGTON (AP) – U.S. home prices jumped 12.2 percent in May compared with a year ago, the biggest annual gain since March 2006. The increase shows the housing recovery is strengthening.    The Standard & Poor's/Case-Shiller 20-city home price index released Tuesday also surged 2.4 percent in May from April. The month-over-month gain nearly matched […]