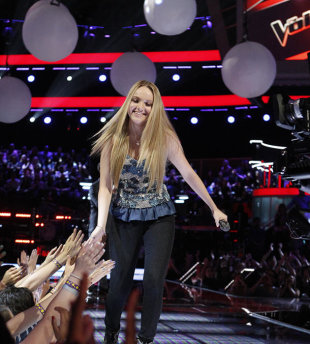 Danielle Bradbery wins "The Voice"!Golden girl Danielle Bradbery made history on Tuesday night's "Voice" finale, becoming the youngest contestant to ever win the series. The 16-year-old country sweetheart also made her coach Blake Shelton, who turned 37 on Tuesday, a very happy birthday boy, giving him another reason to celebrate as he scored his third "Voice" victory in a row.

Danielle was so overcome with happy tears upon hearing the news, she could barely sing her victory song, "Born to Fly." Instead, she spent most of the performance hugging the coaches, her fellow contestants, and her relatives, as she wept and brushed finale confetti from her flaxen hair.

Danielle's win wasn't unique or historical just because of her youth. Unlike her three predecessors, she didn't come to the competition with tons of professional experience. Season 1 winner Javier Colon had released two albums on Capitol Records; Season 2's Jermaine Paul was a longtime backup singer who'd worked with Alicia Keys and Mary J. Blige; and last season's champion, Cassadee Pope, once fronted Hey Monday, a Warped Tour band signed to Columbia Records. But Danielle was just a regular kid singing in her bedroom before her mom signed her up for "The Voice."

Though it was incredible to believe, considering how poised and polished this country wunderkind always seemed onstage, young Danielle had never given a major public performance before auditioning for "The Voice." And she'd certainly never had any sort of record deal. So this season on "The Voice," a star was truly discovered.

It's easy to imagine Danielle moving on to a massive country-pop crossover career and becoming "The Voice's" most successful winner yet. Her Tuesday duet with teen country darling Hunter Hayes was one of the finale's highlights, and she could very well experience Hunter's level of success someday. (Her impressive iTunes sales throughout this "Voice" season, which helped clinch her win, have already proven her marketability.) But hopefully there will also be record deals down the road for Team Usher's maverick Michelle, who placed second, and Blake's other contestant, country-rock duo the Swon Brothers, who came in third.

Of this season's "Voice" final three, Michelle is probably the one who'd make the most interesting and adventurous records, and her iTunes numbers also indicate that there are many people in America willing to buy the quirky brand of pop-rock that she's selling. As for the Swon Brothers, with their party-hardy vibe and natural likability, they definitely have the potential to forge the same sort of career as, say, breakout country stars Florida Georgia Line, who happened to http://t.co/VJhAxDOGJh one of the many other guest performers on Tuesday's finale.

Congrats to all three contestants on a great "Voice" season! And, oh yeah…CONGRATS TO CHER for being the best finale performer ever and for wearing an amazing wig that'd make even Xtina and Cee Lo Green with envy. That is all.

DES MOINES, Iowa — Northwood, a tiny town 4 miles south of the Minnesota border, expected a blizzard Thursday, but not a plume and a boom that triggered a mass exodus.   The Iowa town’s 1,900 residents were asked to evacuate at about 9 a.m. in the wake of a fire with small explosions. Officials […]

US: Ala. inmate in 2005 Halloween killing put to death

ATMORE, Ala. (AP) — Alabama has executed its first inmate since 2011, a man convicted of the beating and shooting death of an elderly man on Halloween night in 2005.   Authorities say 29-year-old Andrew Lackey was pronounced dead at 6:25 p.m. Thursday after receiving an injection at Holman Prison in Atmore.   Authorities say […]

Abrar Shahin, 18 and Muslim, was awarded 'Best Dressed' by her New Jersey high school, shocking her even though she had earned it. Looking at her street style and the confidence with which she pulls off her looks, the honour comes as no surprise. 'My fashion inspiration is definitely Queen Rania of Jordan,' Says Shahin, […]