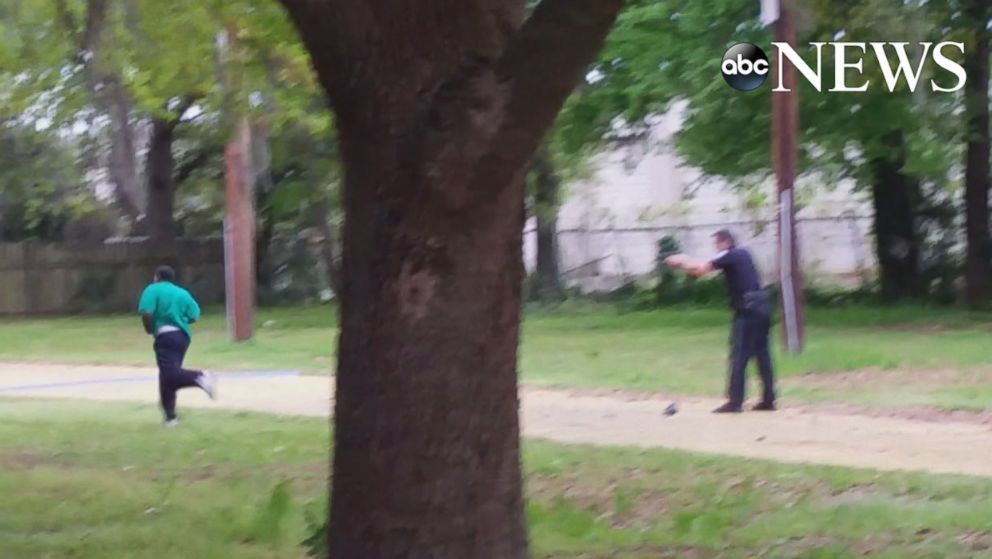 A South Carolina police officer who shot and killed an unarmed man Saturday was formally charged with murder this evening.

Police cited witness video that appears to show the moment when the officer fatally shot a driver whom he had pulled over this weekend, and the victim's family attorney, who gave the video to ABC News, believes it could prove that the officer used excessive force.

North Charleston officer Michael Slager was charged with murdering Walter "Lamar" Scott, 50, who died shortly after the Saturday morning incident. A magistrate at his bond hearing this evening denied him bond and he was being held at the Charleston County Detention Center.

A murder conviction in the state could lead to the death penalty or up to 30 years to life in prison, according to the South Carolina Law Enforcement Division.

The two videos that Scott family attorney Chris Stewart said were recorded by a bystander, whose name has not been released, appear to show the moments when Scott begins to run away from the officer. While the officer's stun gun is not visible in the video, what appears to be a string is visible stretching from Scott to Officer Slager, where it was apparently attaching the stun gun to his clothing. Scott is seen running away from Slager as the officer proceeds to fire eight successive shots in Scott's direction before Scott falls to the ground.

"I can tell you that as a result of that video and the bad decision made by our officer he will be charged with murder and that's not something that we like to hear," Mayor R. Keith Summey said at a news conference this evening.

he county coroner's office did not immediately return ABC News' calls about how many times Scott was hit, but Stewart told ABC News that of the eight fired shots, four hit Scott in the back and one hit him in the ear. The attorney said two of the shots were fatal.

Slager is shown in the video approaching Scott, who is face down on the ground, and then putting handcuffs on his wrists behind his back. Slager then walks away from the body and another officer arrives on the scene, appearing to bend down and take Scott's pulse as Slager comes back toward the scene and talks to the second officer.

The police incident report states that Slager called in a traffic stop in the area and then advised officers that he was in a foot pursuit of the driver of the vehicle.

Slager then said he had deployed his Taser and requested backup units to the scene, according to the police report.

During his next call on the police radio, Slager said: "Shots fired and the subject is down, he took my taser," the police report notes.

Summey said that they were made aware of the video earlier today and Slager was arrested after meeting with investigators.

"It goes to say how we work as a community," Summey said of the decision to charge the officer. "If you're wrong, you're wrong and if you make a bad decision don't matter if you're behind the shield… you have to live by that decision."

At a news conference this evening, Stewart, the Scott family's attorney, said the family is planning to file a civil suit against North Charleston.

He declined to speculate on whether the shooting was racially motivated, but said that "this was a cop who decided he could shoot a man in the back that many times."

In a statement tonight, Gov. Nikki Haley said, "We have many good law enforcement officers in the field. What happened in this case is not acceptable in South Carolina, nor is it reflective of our values or of the way most of our law enforcement officials act, and I assure all South Carolinians that the criminal judicial process will proceed fully. This is a sad time for everyone in South Carolina, and I urge everyone to work together to help our community heal.”

Walter Scott's brother Anthony said the family wanted the truth of what happened.

"If we didn't see the video, would we know the truth?" he said. "From the beginning … all we wanted was the truth. … We can't get my brother back … but through the process, justice has been served."

"I don't think all police officers are bad cops," he added. "But I don't want to see someone shot down like my brother."

"This is a very tragic event for all of the families," Slager's attorney David Aylor said Sunday in a statement released to ABC News affiliate WCIV in Charleston.

"Officer Slager believes he followed all the proper procedures and policies of the North Charleston Police Department," Aylor's statement said.

Aylor told ABC News today he is not the officer's attorney at this point. "I have no further information on this situation," he said.

Slager has been a member of the North Charleston police department since 2009 and previously served in the Coast Guard.

The Washington Navy Yard reopened Thursday in an atmosphere of sadness for those lost in Monday's shooting spree, mystery over why it happened and controversy over the law enforcement response to it.   The FBI says Navy contractor Aaron Alexis, 34, assembled a shotgun in a men's room and killed 12 people before he was […]

Amazon has yet to reveal its long-rumored smartphone, but the device may already have an exclusive carrier. According to The Wall Street Journal, which cites "people familiar with the plans," AT&T will exclusively carry Amazon's smartphone, which CEO Jeff Bezos is expected to unveil in Seattle Wednesday. USA TODAY was unable to independently verify the […]

(CNN) — His journey started in Nigeria, a taunted teenager with large tumors on his face, driven into deep despair. Eleven years later, Victor Chukwueke has undergone numerous surgeries and is a step closer to achieving his dream of becoming a doctor. In a rare act,the United StatesCongress passed a private bill last week granting […]