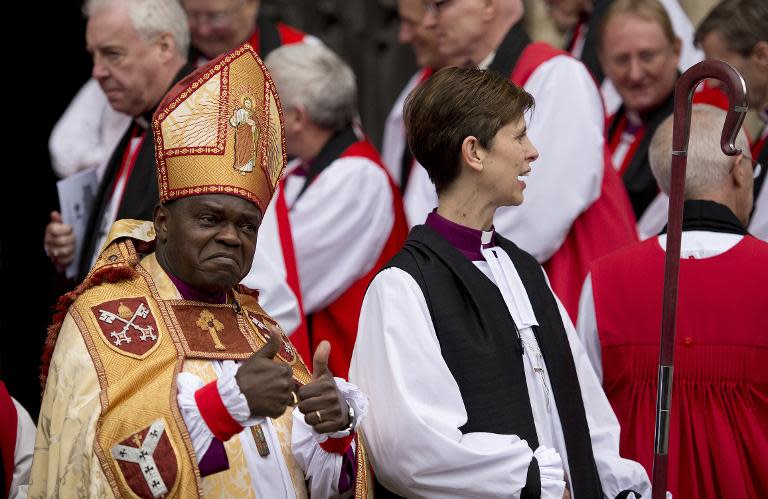 London  – The Church of England's first female bishop was to preach her maiden sermon in the role Sunday as she is installed in her home diocese.

Libby Lane, born in 1966, is saxophone player with a taste for football who was appointed in December as the new bishop of Stockport, a town outside Manchester in northwest England.

Her nomination came a month after England's state church gave final approval to the dramatic change to its hierarchy following years of wrangling and division.

The move was hailed as an important step towards greater equality.

She was consecrated in York Minster on January 26 but Sunday's ceremony in Chester, northwest England, marks the formal beginning of her ministry in her diocese.

She will be presented with her pastoral staff and be welcomed by the civic and faith communities in a service expected to be attended by more than 1,500 people.
As bishop of Stockport, Lane is a suffragan (assistant) bishop in the Diocese of Chester.

Gordon McPhate, the dean of Chester, said: "We are honoured to welcome the bishop of Stockport and her supporters to this installation service at the cathedral.

"The service will mark a day of worship and celebration — for men and women alike — as a new chapter is created in the Church of England."

The church's move ended a tortuous process allowing for female bishops that set liberal and conservative believers at odds.

The Church of England backed the introduction of female priests in 1992 and the first were appointed two years later.

They now make up one-third of the clergy.

It is the mother church of the global Anglican Communion, which has around 85 million followers in more than 165 countries.

Other Anglican churches around the world have been appointing female bishops for years.

The first was appointed in the United States in 1989 and there are now more than 30 worldwide, in countries such as Australia, Canada, Cuba, New Zealand and Swaziland.

Lane was educated at the University of Oxford and became a priest in 1994.

Her husband, George, is also a minister. They were one of the first married couples in the church to be ordained together. He is a chaplain at Manchester Airport

The BLACK George Zimmerman is in PRISON Today

In anticipation of the rebuttals of Zimmerman proponents, and armchair self-defense law experts who believe that “he had the right to shoot, because it was Florida law,” we must state out the outset that George Zimmerman’s defense did not rest on Florida law, nor the controversial Stand Your Ground defense. This defense was much speculated upon […]

WASHINGTON — The U.S. House approved, in a 261-157 vote Friday, a GOP proposal to allow insurers to continue offering health care plans to new and existing customers through next year, even if the plans do not meet new federal requirements.   Thirty-nine Democrats supported the measure despite Democratic leaders' opposition and a veto threat […]

No respect: Why the Oscars ignore films about young people

When people talk about the cinematic geniuses of the 1980s, one name invariably comes up — John Hughes. For young people growing up then and even today, the writer-director’s name conjures up memories of unforgettable films. From “Sixteen Candles” (1984) and “The Breakfast Club” (1985) to “Pretty in Pink” (1986) and “Ferris Bueller’s Day Off” […]