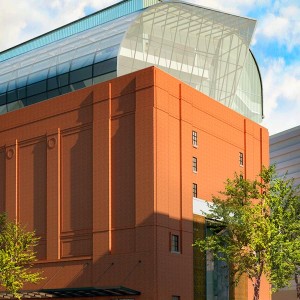 In Washington, D.C., construction is underway on the Museum of the Bible, an eight-story, $400 million enterprise funded by Hobby Lobby President Steve Green.

Green is a Pentecostal known for donating to conservative evangelical universities and developing a public school curriculum based on the Bible. After the craft store's controversial victory in this summer's Supreme Court ruling over contraception, some people worry the new museum will come across as evangelical propaganda. But organizers behind Green's latest venture say it won't be a memorial to evangelism.

The Museum of the Bible will house the more than 40,000 artifacts in Green's personal collection, including Jewish Torah scrolls and papyrus fragments of the New Testament.

But the museum won't just put relics on display. As museum President Cary Summers explains, visitors can stroll through the biblical garden.

"So people can actually see what a Rose of Sharon is," he says. "And what does a Hyssop bush look like?"

They can visit the cafe for flatbread, date honey and other biblical foods. It's part of what Summers calls an "immersive" experience.

"We want this to be highly engaging for people of all ages, all cultural backgrounds, all faiths, no faiths," he says.

But some people, like Jewish civilization professor Jacques Berlinerblau of Georgetown University, are skeptical.

"Oh, those crafty white conservative evangelicals!" he says. "They're so savvy. They're so politically cunning."

"When there's an anti-abortion rally, an anti-gay marriage rally, an anti-Affordable Care Act rally to be had, what a convenient thing to have church groups coming to see the museum," he says, "and then while they're at it, next step on their itinerary is to march down to the Mall for a protest."

Summers says that's not the plan. He says they chose the site for its crowd drawing potential. After all, more than half of the Smithsonian's 19 museums line the National Mall.

Michael Jackson's personal clairvoyant has died – after apparently predicting her own demise. Jillian Lane, who billed herself as the number one celebrity psychic in Los Angeles, had confided in friend and colleague Dr Suzanne Yessayan that she believed she would die from liver disease.   She decided to come back from Los Angeles to […]

A gunman opened fire on a town supervisors meeting north of Philadelphia on Monday night, killing three people and wounding two others, police said.   Pennsylvania state police dispatcher Tyler Graumenz confirmed that three people were killed and said a suspect was in custody at an area hospital.   The gunman reportedly was shot by […]

WILMINGTON, Del. — A Delaware judge on Thursday ordered the owner of the former presidential yacht USS Sequoia to sell the boat for $7.8 million, minus legal fees and loans, to a Washington-based investment group after a legal battle in Chancery Court.   Gary Silversmith, the Washington lawyer who owns the boat, argued that FE […]