The United States of America has condemned the rescheduling of Nigeria's general elections from the initial dates of Saturday 14 and Saturday 28 of February 2015 to Saturday March 28 and Saturday April 11, 2015.

That country’s secretary of state, Mr John Kerry, has described the postponement as “unacceptable”. Its position is apparently informed by the assurances earlier given by President Goodluck Jonathan during a recent visit to Nigeria by Mr John Kerry, that the polls would not be postponed under any circumstances.

However, the position of the US with respect to Nigeria’s polls, particularly the shift in dates, is curious, given that the Boko Haram insurgency and related insecurity in the country remain the reason for the development. It is recalled that the US had earlier denied Nigeria critical military assistance to combat the wave of insecurity when such was needed most.

This is even as that country is also engaged in the global anti-terror fight and is fully aware of the transnational dimensions of the problem. It is therefore fully aware of Nigeria’s burden as the epicentre of the insurgency challenge in the West African sub-region.

The reservations of the US over the polls shift would be better located if the shared strategic interest of the US and this country in combating terrorism in any part of the world had propelled more decisive support for Nigeria by the superpower.

Not enough eyelids were raised by US Secretary of State John Kerry’s visit so close to the election last month and met the opposition candidate Muhamamdu Buhari. It was then fair to speculate that Mr. Kerry was offering assurances of cooperation in exchange for assurances of a peaceful election.

Despite the administration’s recent lectures on state visits near election time that concerned Bibi Netanyahu of Israel and Angela Merkel of German, the State Department played tone-def to the legitimacy and perceived U.S. approval given to Mr. Buhari in his meeting with Mr. Kerry.

The public acknowledgement of the meeting in diplomatic currency was indeed a clear act of favoritism.

Thanks to the reporting of Adam Kredo, we now know that it was something more nefarious. David Axelrod is Mr. Buhari’s lobbyist and in this administration you can buy the presidency of Africa’s most populous nation.

According to the Washington Free Beacon report, Mr. Axelrod’s firm, AKPD, was employed by Mr. Buhari’s APC party as recently as December 2014. The timing of Mr. Kerry’s visit the next month within in that context puts a shorter lifespan on the Jonathan presidency.

In a report in the Washington Free Beacon, an online newspaper, the political consulting firm founded by Obama administration confidante David Axelrod has been far more involved in backing controversial Nigerian presidential candidate Gen. Muhammadu Buhari than previously disclosed, according to a series of emails obtained by the Washington Free Beacon and interviews with sources on the ground.

But email exchanges with senior party members and advisers since then “show that contrary to the firm’s claims, AKPD has quietly continued to perform political work on Buhari’s behalf as he fights to unseat current President Goodluck Jonathan”, the newspaper said. 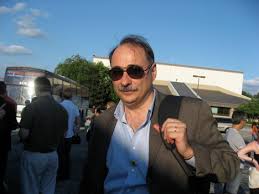 However, he was said to have admitted on Monday that the firm worked again with the APC in December 2014. “AKPD worked with APC from December 2013 to March 2014, at which point our contract ended.

Nine months later, in December 2014, the APC re-hired AKPD for a 3-week engagement to help the party in organizing announcement events,” Baker told the Free Beacon in an email. “That was our only involvement with the party since we completed work in March. That project is now complete and we have no ongoing relationship with them,” he said.

Kerry met with Jonathan where he reportedly warned against poll shift In a series of messages between senior APC officials and advisers from September 2014 to late January 2015, AKPD polling and other work are repeatedly discussed, the newspaper reported.

Other sources on the ground and familiar with the Buhari’s campaign say that his party has been trying to keep AKPD’s ongoing work quiet. It is rumored that AKPD employees are being housed in an APC compound located in Lagos, according to the report.

“They have been particularly careful not to be seen at all because of the perception of the connection between Axelrod and the president and what that would convey,” said one of the sources quoted above.

Apart from Barack Obama's friends working for Buhari, the Israeli media last month revealed that the US stopped Nigeria’s purchase of Chinook military helicopters from Israel to fight Boko Haram.

The sale/transfer of such aircraft required a review by the US, to determine its “consistency with US policy interests,” Obama administration officials told The Jerusalem Post.

It quoted White House Assistant Press Secretary and Director for Strategic Communications, Ned Price, as saying that reviews of such kind take place in the case of “any requests for one country to transfer US-origin defence items to another country.”

Nigeria’s largest arms purchase ever reported was from Israel in 2007, in a deal with Aeronautics Systems worth $260 million. That company is Israeli, however, not American.

The Nigerian military had in the past said that the country also resorted to training its security personnel on terrorist encounters in Russia and China because of the refusal of the Obama administration to sell arms to the government following “unfounded allegations of human rights violations by our troops,” among others.

However, the reports quoted unnamed Nigerian officials as also saying that the US blocked the order “after the office of Prime Minister Benjamin Netanyahu had initially approved the purchase.”

US officials told The Jerusalem Post that such transfers must be consistent with a policy directive revised by President Barack Obama in January, which outlines the criteria for conventional weapons sales.

The policy requires US transfers, including Boeing aircraft, to take into account “the risk that significant change in the political or security situation of the recipient country could lead to inappropriate end-use” of the weapons.

Israeli laws concerning the export of arms is less restrictive than those in the United States. Israel, however, is a member of the United Nations Register of Conventional Arms and, in 2009, reported to the body that Israel, in practice, refrains from transfers “where there is imminent risk that arms might be internally diverted, illegally proliferated and re-transferred, or fall into the hands of terrorists or entities and states that support or sponsor them.”

Sixteen nations operate the Chinook helicopter, none of which are in sub-Saharan Africa.

Nigerian officials were reported as saying that “we had even tried to procure arms from Russia but this was stalled because of the Ukrainian crisis, thus compelling us to turn to other nations like Israel. But even this has been frustrated by the US.”

They further said it was not just in the area of arms procurement that US has been most unhelpful, adding that contrary to its public stance that it was assisting in the rescue operations of the abducted Chibok secondary school girls, it has done nothing significant to help Nigeria in this regard.

Other intelligence sources also cited the fact that the US has refused to share intelligence with Nigerian security forces in a timely manner.

They said: “When we complained, they started sharing some intelligence, but days after such intelligence is of little value”.

Boko Haram gained notoriety around the world after its militants kidnapped 276 students of Government Girls Secondary School, Chibok in Borno State in April last year. The US sent military personnel to assist in finding the girls.

The US and Nigeria have traditionally enjoyed robust bilateral relations, with the former being the latter’s largest importer of crude oil.

While the present developments in the international oil market have imposed some strain on that relationship, it would serve the greater interest of the two countries to retain and grow the ties that bind them. Without exaggeration, if there is any area where Nigeria needs the support of the US currently, it is in the suppression of the Boko Haram insurgency.

A pointer to that is the recent resolve by the African Union (AU) to launch a continental force to combat the menace. The initiative of the continental body was informed by Nigeria’s strategic position in African affairs.

While the interest of the US in the outcome of the polls and other political developments in this country is welcome, its assistance in a time of need as now as a true friend of Nigeria would be highly appreciated.

In the words of Nicholas Hanlon of Washington Times: "President Jonathan must now fight without firm footing against Boko Haram, his political opponents, U.S. diplomats and their lobbyists. He has about a month to make something happen."

US: Sarah Palin’s smart not to run, supporters say

Sarah Palin wasn’t ever really going to run for president, was she? That’s Donald Craig Mitchell’s guess. In an Op-Ed that discusses Palin’s decision not to run, Mitchell says she’s long prioritized her celebrity career over her commitment to public office, reminding us of Palin’s lucrative deals that followed after she quit as Alaska’s governor, […]

The head of the BBC Trust has been told by a senior MP she is "totally incompetent" and should resign. Margaret Hodge, chair of the Commons Public Accounts Committee, gave Rona Fairhead a dressing down during a hearing over failings at HSBC bank where she had oversight of the bank's audit committee. It followed revelations […]

WASHINGTON — Five years after the passage of a groundbreaking law establishing equality between mental health care and other medical treatments, the Obama administration announced its final rule Friday defining how that treatment must be provided.   The rule requires insurers to charge similar co-payments for mental health treatment as they would for physical ailments. […]