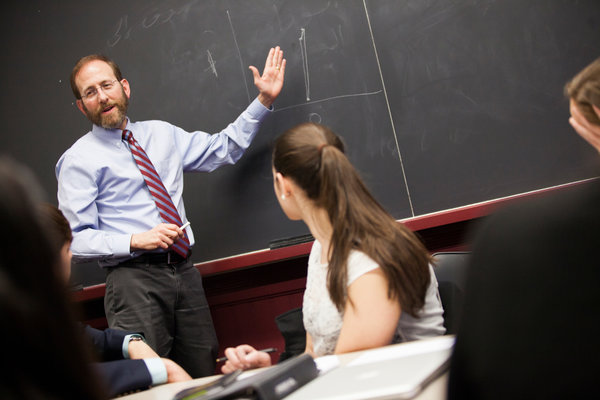 Dr. Alan M. Garber, a physician and health economist who is the provost at Harvard, defended the change in benefits, acknowledging that Harvard employees would face greater cost-sharing but saying that such a policy "can slow the growth of health spending.” Credit Stephanie Mitchell, via Harvard University

WASHINGTON — For years, Harvard’s experts on health economics and policy have advised presidents and Congress on how to provide health benefits to the nation at a reasonable cost. But those remedies will now be applied to the Harvard faculty, and the professors are in an uproar.

Members of the Faculty of Arts and Sciences, the heart of the 378-year-old university, voted overwhelmingly in November to oppose changes that would require them and thousands of other Harvard employees to pay more for health care. The university says the increases are in part a result of the Obama administration’s Affordable Care Act, which many Harvard professors championed.

The faculty vote came too late to stop the cost increases from taking effect this month, and the anger on campus remains focused on questions that are agitating many workplaces: How should the burden of health costs be shared by employers and employees? If employees have to bear more of the cost, will they skimp on medically necessary care, curtail the use of less valuable services, or both?

“Harvard is a microcosm of what’s happening in health care in the country,” said David M. Cutler, a health economist at the university who was an adviser to President Obama’s 2008 campaign. But only up to a point: Professors at Harvard have until now generally avoided the higher expenses that other employers have been passing on to employees. That makes the outrage among the faculty remarkable, Mr. Cutler said, because “Harvard was and remains a very generous employer.”

In Harvard’s health care enrollment guide for 2015, the university said it “must respond to the national trend of rising health care costs, including some driven by health care reform,” in the form of the Affordable Care Act. The guide said that Harvard faced “added costs” because of provisions in the health care law that extend coverage for children up to age 26, offer free preventive services like mammograms and colonoscopies and, starting in 2018, add a tax on high-cost insurance, known as the Cadillac tax.

Richard F. Thomas, a Harvard professor of classics and one of the world’s leading authorities on Virgil, called the changes “deplorable, deeply regressive, a sign of the corporatization of the university.”

Mary D. Lewis, a professor who specializes in the history of modern France and has led opposition to the benefit changes, said they were tantamount to a pay cut. “Moreover,” she said, “this pay cut will be timed to come at precisely the moment when you are sick, stressed or facing the challenges of being a new parent.”

The university is adopting standard features of most employer-sponsored health plans: Employees will now pay deductibles and a share of the costs, known as coinsurance, for hospitalization, surgery and certain advanced diagnostic tests. The plan has an annual deductible of $250 per individual and $750 for a family. For a doctor’s office visit, the charge is $20. For most other services, patients will pay 10 percent of the cost until they reach the out-of-pocket limit of $1,500 for an individual and $4,500 for a family.

Previously, Harvard employees paid a portion of insurance premiums and had low out-of-pocket costs when they received care.

Michael E. Chernew, a health economist and the chairman of the university benefits committee, which recommended the new approach, acknowledged that “with these changes, employees will often pay more for care at the point of service.” In part, he said, “that is intended because patient cost-sharing is proven to reduce overall spending.”

The president of Harvard, Drew Gilpin Faust, acknowledged in a letter to the faculty that the changes in health benefits — though based on recommendations from some of the university’s own health policy experts — were “causing distress” and had “generated anxiety” on campus. But she said the changes were necessary because Harvard’s health benefit costs were growing faster than operating revenues or staff salaries and were threatening the budget for other priorities like teaching, research and student aid.

In addition, some ideas that looked good to academia in theory are now causing consternation. In 2009, while Congress was considering the health care legislation, Dr. Alan M. Garber — then a Stanford professor and now the provost of Harvard — led a group of economists who sent an open letter to Mr. Obama endorsing cost-control features of the bill. They praised the Cadillac tax as a way to rein in health costs and premiums.

Dr. Garber, a physician and health economist, has been at the center of the current Harvard debate. He approved the changes in benefits, which were recommended by a committee that included university administrators and experts on health policy.

In an interview, Dr. Garber acknowledged that Harvard employees would face greater cost-sharing, but he defended the changes. “Cost-sharing, if done appropriately, can slow the growth of health spending,” he said. “We need to be prepared for the very real possibility that health expenditure growth will take off again.”

But Jerry R. Green, a professor of economics and a former provost who has been on the Harvard faculty for more than four decades, said the new out-of-pocket costs could lead people to defer medical care or diagnostic tests, causing more serious illnesses and costly complications in the future.

“It’s equivalent to taxing the sick,” Professor Green said. “I don’t think there’s any government in the world that would tax the sick.”

Meredith B. Rosenthal, a professor of health economics and policy at the Harvard School of Public Health, said she was puzzled by the outcry. “The changes in Harvard faculty benefits are parallel to changes that all Americans are seeing,” she said. “Indeed, they have come to our front door much later than to others.”

But in her view, there are drawbacks to the Harvard plan and others like it that require consumers to pay a share of health care costs at the time of service. “Consumer cost-sharing is a blunt instrument,” Professor Rosenthal said. “It will save money, but we have strong evidence that when faced with high out-of-pocket costs, consumers make choices that do not appear to be in their best interests in terms of health.”

Harvard’s new plan is far more generous than plans sold on public insurance exchanges under the Affordable Care Act. Harvard says its plan pays 91 percent of the cost of services for the covered population, while the most popular plans on the exchanges, known as silver plans, pay 70 percent, on average, reflecting their "actuarial value.”

"None of us who protested was motivated by our own bottom line so much as by the principle,” Ms. Lewis said, expressing concern about the impact of the changes on lower-paid employees.

In many states, consumers have complained about health plans that limit their choice of doctors and hospitals. Some Harvard employees have said they will gladly accept a narrower network of health care providers if it lowers their costs. But Harvard’s ability to create such networks is complicated by the fact that some of Boston’s best-known, most expensive hospitals are affiliated with Harvard Medical School. To create a network of high-value providers, Harvard would probably need to exclude some of its own teaching hospitals, or discourage their use.

“Harvard employees want access to everything,” said Dr. Barbara J. McNeil, the head of the health care policy department at Harvard Medical School and a member of the benefits committee. “They don’t want to be restricted in what institutions they can get care from.”

Although out-of-pocket costs over all for a typical Harvard employee are to increase in 2015, administrators said premiums would decline slightly. They noted that the university, which has an endowment valued at more than $36 billion, had an unusual program to provide protection against high out-of-pocket costs for employees earning $95,000 a year or less. Still, professors said the protections did not offset the new financial burdens that would fall on junior faculty and lower-paid staff members.

“It seems that Harvard is trying to save money by shifting costs to sick people,” said Mary C. Waters, a professor of sociology. “I don’t understand why a university with Harvard’s incredible resources would do this. What is the crisis?”

Snowden says he took no secret files to Russia

Edward Snowden says he left all classified documents in Hong Kong and took none to Russia after fleeing from his job at the National Security Agency, The New York Times reported Thursday.   The former NSA contractor also said he protected the files from China's intelligence agents.   "There's a zero percent chance the Russians […]

Power back in Michigan, Maine; more snow set for Maine

Just as power had been restored to most of the nearly 800,000 customers who lost it in the ice storm days before Christmas in Michigan and Maine, Maine was bracing for another snowstorm.   It could bring additional snow-related power outages Sunday night and Monday to parts of New England. "That is a concern," said […]

When the shots rang out at the Naval Sea Systems Command headquarters in Washington on Monday morning, civilian employee Omar Grant let others run for the exits on the first floor of an atrium while he took his visually-impaired coworker by the arm, Yahoo! News reported.   People left behind keys, cellphones and other personal […]