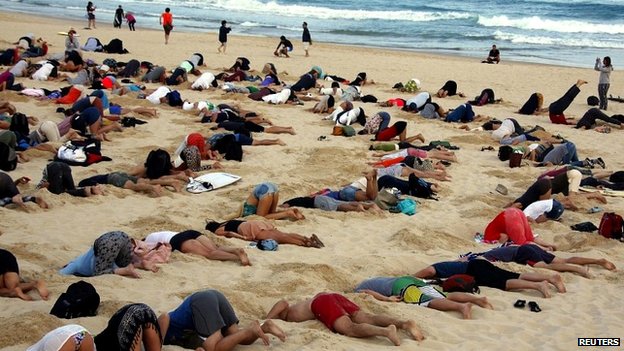 Russian President Vladimir Putin has said that US and EU sanctions will harm not just Russia but the global economy. He said the sanctions were a mistake, going against trade accords and only the UN had the right to impose them.

The sanctions were introduced over Russia's annexation of Ukraine's region of Crimea and its alleged involvement in eastern Ukraine.

Mr Putin was speaking ahead of the G20 summit in Brisbane, Australia, which is to focus mainly on promoting growth.

World leaders including Mr Putin, US President Barack Obama and Chinese President Xi Jinping are gathering for the two-day meeting. 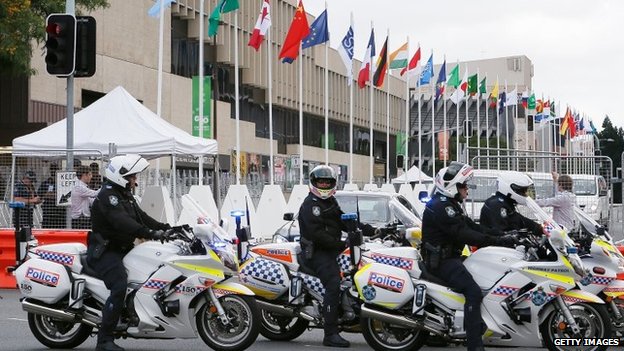 Campaigners also want climate change on the agenda, but Australia has been firm in keeping it off.

In an interview for Russia's Itar-Tass news agency, Mr Putin said it would be pointless to raise the issue of sanctions at the summit but that he would talk about it if asked.

The sanctions were illegal and harming not only Russia but world trade, he added.

This contradicts international law, because sanctions can only be imposed within the framework of the United Nations and its Security Council, he said.

Mr Putin added that the sanctions also went against the principles of the World Trade Organization (WTO), which the US had helped set up and was now grossly in breach of.

This is harmful, and of course is doing us some damage, but it's harmful for them as well because, in essence, it's undermining the entire system of international economic relations, he continued.

I believe it's a mistake, even from the point of view of their geopolitical interests.

He said Russia “ as an oil and gas producer with gold and currency reserves “ could cope with the sanctions and would continue to meet its social commitments.

Mr Putin also warned Germany that 300,000 jobs could be at risk if there were no contracts with Russia.

The BBC's Steve Rosenberg in Moscow says the sanctions have been putting increasing pressure on the Russian economy and on the national currency, as the rouble continues to weaken.

Many Australians accuse Mr Putin of being behind the downing of flight MH17
The Queensland city of Brisbane is hosting the two-day summit
Security will be tight for the summit, with protests expected 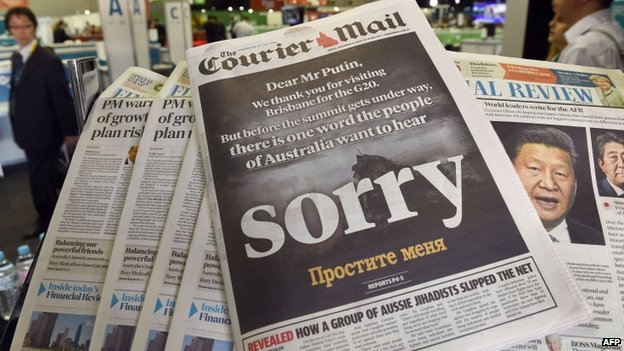 The sanctions have been imposed in several rounds, beginning in March after Crimea's annexation, and include travel bans and asset freezes on certain individuals and businesses.

More were imposed following allegations that Russia was sending its soldiers to fight with separatist rebels in eastern Ukraine. The Kremlin denies the allegations.

More than 4,000 people have died in the conflict between Ukraine's military and pro-Russian rebels in the eastern Donetsk and Luhansk regions.

Mr Putin has also come under fire because of the alleged role of pro-Russian rebels in the downing of Malaysia Airlines flight MH17, with many Australians calling for him to be barred from the summit. 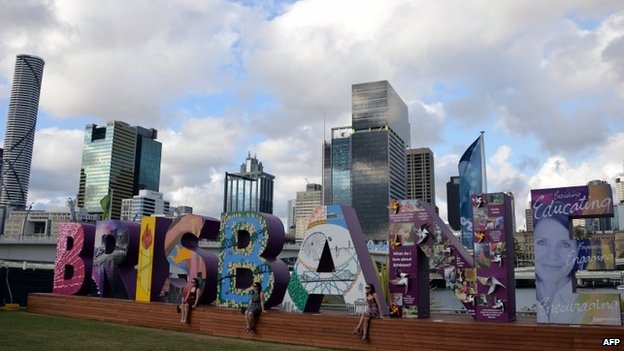 Thirty-eight Australians were among the 298 people who died when the plane was brought down over rebel-held eastern Ukraine, by a missile that the West believes was supplied by Russia. Russia rejects the claim.

When the summit begins on Saturday, leaders are expected to expand on plans agreed in February at the G20 finance ministers' meeting to boost global economic growth by 2% in five years.

However, Australia is facing criticism after failing to allow climate change on to the agenda and over its domestic policies on the issue.

On Thursday, more than 200 protesters buried their heads in the sand at Bondi Beach in a symbolic demonstration over climate change inaction.

Is the US in real trouble? We’re about to find out

Despite a series of economy data points that would seem to indicate that US growth has been slowing, investors may be waiting before they get worried. But if data comes in weak over the next two weeks, the wait could be over. “This week’s going to be an interesting one, because the economic data that’s […]

The United States has urged the nation’s political leadership and aspirants to elective offices, to refrain from inflammatory rhetoric and supporting acts of intimidation ahead of the general elections barely a month away.

US Army PFC Bradley Manning was acquitted Tuesday of aiding the enemy, the most serious charge he faced in disclosing classified documents to Wikileaks.    He was found guilty of at least 15 lesser charges for illegal release of documents.    He could still face up to a maximum of more than 150 years in […]