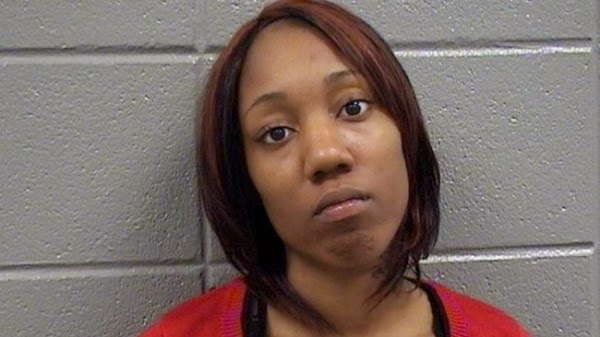 Ciera Ross, a mother of two, has been arrested and charged with raping a man. According to CBS Chicago, Ross and a friend were driving on the North Side of Chicago when they saw a man walking down the street in late July.Ross, 25, stopped and asked the 33-year-old man if he wanted a ride.

The man took the offer, but Ross’ true intentions became evident when she pulled a gun on the man…

She forced the man to go to the backseat and told him to have sex with her friend. The man pleaded for the women to stop after they made him fondle the woman’s breasts and butt. Ross then ordered the man to take his clothes off and her friend began to assault him sexually. The women also took $200 and credit cards from the man.

The male victim was able to escape when he saw a taxi cab and ran from the car naked. The cab driver allowed the man to use his cellphone to take a picture of Ross’ license plate.

Chicago police arrested Ross on Sept. 3 and the victim identified her as the assailant. Ross has been arrested for prostitution in the past, but she recently held a position at Denny’s as a waitress. She was charged with rape and armed robbery and held on a $75,000 bond. Her friend has yet to be charged.

GREEN BAY, Wis. — Even as immigration reform remains up for congressional consideration this fall, deportations continue to take place regularly across the Midwest.   However, it is less likely to be in the news than it was several years ago.   In the 1990s, U.S. Immigration and Customs Enforcement would storm workplaces, march dozens […]

WASHINGTON — Former Illinois congressman Jesse Jackson Jr. was sentenced to two and a half years in prison Wednesday for using $750,000 in campaign money for living expenses, trips and luxury goods — a stunning fall for a once-rising political star from a famous family.   Jackson and his wife, Sandi Jackson, treated campaign funds […]

UNITED NATIONS â€“ The U.N. Security Council moved as a powerful bloc Saturday to try to halt Libyan leader Moammar Gadhafi’s deadly crackdown on protesters, slapping sanctions on him, his children and top associates. Voting 15-0 after daylong discussions interrupted with breaks to consult with capitals back home, the council imposed an arms embargo and […]