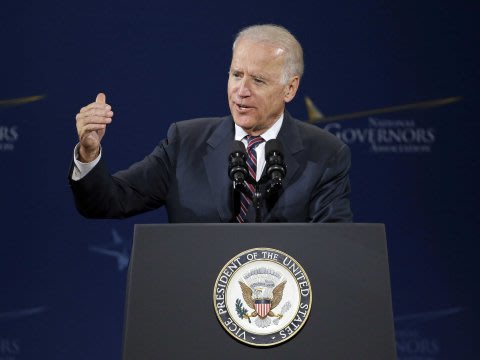 Vice President Joe Biden, who is infamously gaffe prone, reflected on his habit of sticking his foot in his mouth in a Friday speech before the National Governors Assocation.

"I probably shouldn’t say this, but then again I’m Joe Biden," he quipped, causing widespread laughter in the audience. "No one ever doubts I mean what I say, but the problem is I sometimes say all that I mean."

Unfortunately for Biden-watchers, the vice president's follow-up statement wasn't especially scandalous by Biden standards. He merely called the decades spent in the U.S. Senate the "greatest honor" of his life — presumably even more than being vice president.

"But I mean this sincerely," Biden continued. "I was thinking about this a lot the last three to four weeks. The greatest honor of my life was to be a United States senator and to serve for all those years in the United States Senate with some of the greatest, finest people I've ever known in my life. And I loved it."

Having agreed to meet Elton John to discuss gay rights, the Russian President has laid out a schedule to meet other ‘influential’ 70’s glam rockers to improve his international relations. First on his list will be Roy Wood, ensuring that for the people of the Ukraine it is Christmas is every day; meaning cold, bleak […]

Colorado Man Roy Ortiz May Sue Rescuers Who Saved His Life For $500,000

This guy may need a PR rescue. Roy Ortiz of Broomfield, Colo. was saved from a submerged car during heavy flooding in the area last September, but he’s now considering suing his rescuers. Now, his lawyer told the Denver Channel, the rescuers shouldn’t have taken two hours to free him. “Of course he was thankful […]

Tony Blair, who sees David Cameron in a formal capacity as the Middle East envoy. Photograph: Chris Jackson/PA Since his departure from No 10 just over six years ago, Tony Blair has gone out of his way to be polite about his successors. But the former PM's patience finally snapped on Thursday when David Cameron […]