Russian President Vladimir Putin's movement eastwards can no longer be in any doubt.

Attending the St Petersburg Economic Forum, the annual meeting Putin set up in his hometown to rival Davos, last week, was almost more about who wasn't there than who was.

While evening receptions hosted by Russian companies had opulence to rival the last days of the "ancien regime" at Versailles, the high-profile U.S. attendees of recent years — like Lloyd Blankfein of Goldman Sachs — were notably absent. The most high-profile foreign delegates were from China, like Vice Premier Li Yuanchao.

Putin was eager to stress the importance of deals like Gazprom's recently inked 30-year gas supply contract with China, and the creation of a new "Eurasian Union" with Russia and some of the old Soviet states.

He brushed off the effects of sanctions on Russia's economy, and those of his personal friends who have been targeted, and pledged to rely less on Western imports. Russia's central bank governor was adamant at one panel that it didn't need the support of the other member countries of the G-8 group of leading industrialized nations – which is useful, given that it has been suspended from the organization. 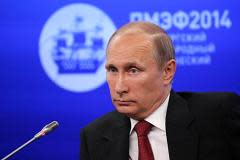 In St Petersburg, Putin's jokes about Ukraine giving Russia back the money it borrowed and pledges to turn from West to East were met with joyous applause from the business leaders in attendance.

Behind the set pieces and shows of strength, like Putin's speech and conversation on stage with CNBC's Geoff Cutmore, there was a more cautious tone. Some delegates quietly expressed concerns that this movement towards greater co-operation with China and other fast-growth markets may end up being a regression rather than progression of Russia's economy, which is heavily dependent on revenue from energy exports.

Putin's strong stance over Ukraine, parts of which have asubstantial Russian ethnic minority, seems to have been met with popular approval at home. It has been less positive for foreign and domestic investment in Russia, with investors changing their roubles for dollars and companies putting off investments in the country until the future looks more certain.

Interest rates have soared to 7.5 percent this year,which will raise the cost for Russian companies of repaying their loans, and consequently the amount they can re-invest in the economy. They also hold around $700 billion in external debt, mostly in foreign currencies, which will have become more expensive as the rouble has slid in value.

Wealthy Russians have got used to buying everything from jewelry to property in the West, and may not give these up for domestic equivalents too easily.

Catherine Boyle is a writer and correspondent for CNBC

TACLOBAN, Philippines — Boats lie tossed on the shore here. Whole roofs and trees smother cars and rickshaws. Streets look more like garbage dumps, piled high with split wood, broken glass, concrete chunks.   But it is the small belongings that stand out. A teddy bear here, a toy fishing net there, all swept into […]

(Newser) – Police in New York City have made a breakthrough in a case that horrified the city in the summer of 1991. A toddler who became known as "Baby Hope" was found dead in a cooler by highway workers in Washington Heights, tied up and in a plastic bag.   The girl, believed to […]

Editor's note: The following article contains references that may not be suitable for all readers. Clermont, Florida (CNN) — Just days after getting arrested in a child sex sting, Robert Kingsolver is a long way from his beloved job at Walt Disney World. Inside his rented house in a suburban Orlando neighborhood filled with children, […]