When Mark Zuckerberg says he wants to “connect the worldâ€™s people,” itâ€™s not some gentle, humanist statement. Zuckerberg intends to own the communications layer of the world we live in â€” if todayâ€™s $16-plus billion acquisition of messaging service WhatsApp is any indication. Facebook grew up inventing the worldâ€™s leading social network for sharing with everyone you know, and it now owns what could be called the worldâ€™s largest private social network. Between the two companies, about 1 billion photos and 30 billion messages are sent per day.

While Facebook slaved away creating a utility used by 1.25 billion people, WhatsApp has replaced an essential utility for many, SMS. WhatsApp is used by over 450 million people every month, and often in places Facebook and its Messenger app had little success reaching, like Spain and Switzerland. By filling in the gaps with WhatsApp, Facebookâ€™s communication pipes are thicker and spread far wider than ever before. The company commands an enormous portion of the worldâ€™s messages and photos sent per day. And donâ€™t forget that WhatsApp users send a whopping 200 million voice messages per day. For many, WhatsApp has likely replaced voice calls as well. 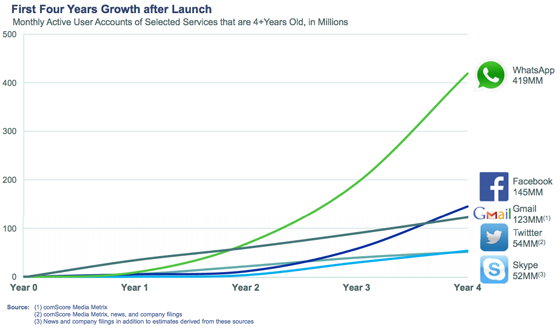 Facebookâ€™s latest acquisition might appear to be a simple land grab for the hottest mobile app in the world, with some delightful side effects, but the reality is far bigger. Each company Facebook acquires is another hedge against the various public and private ways people choose to communicate. Instagram lets people share photos in a way Facebookâ€™s friending model wouldnâ€™t allow. WhatsApp lets people share messages in a way thatâ€™s familiar to first-time feature phone and smartphone users â€” something Facebook canâ€™t boast. Facebookâ€™s product portfolio is becoming vast, full of competing services and apps, and thatâ€™s okay.

Facebook is now a conglomerate kind of like Disney, says Re/codeâ€™s Kara Swisher, owning all the best brands and serving all demographics simultaneously. Facebook plans to operate these and likely future product acquisitions independently, to see which one gets the biggest. The company simply doesnâ€™t want to mess with the formula thatâ€™s ostensibly killing it, whether itâ€™s Instagram, WhatsApp, or the next hot communications app. 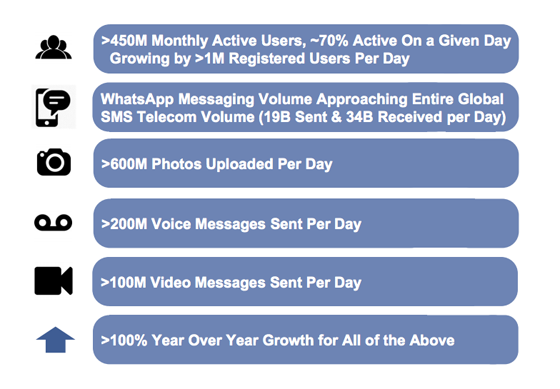 But Facebook is not just diversifying its product portfolio. Itâ€™s also diversifying its business model. Facebook had the opportunity to make WhatsApp free, like all of its other products, but chose not to. WhatsApp CEO Jan Koum promises that the service will remain ad-free under its $1 dollar a year revenue model. With Koum on Facebookâ€™s board, perhaps the company will consider similar revenue streams in the future. WhatsAppâ€™s runaway success with its own business model proves that thereâ€™s a lot of breathing room for essential services to monetize without ads or in-app purchases.

“WhatsApp is the only app weâ€™ve ever seen with higher engagement than Facebook itself.”

Itâ€™s unclear how much say Koum will have in future Facebook products, but by including him in its board, Facebook is also diversifying its thought process. Facebookâ€™s internal slogan is “move fast and break things,” but WhatsApp has done the polar opposite. While competitors, Facebook Messenger included, added features, removed them, came alive, and went under, WhatsApp held fast to its belief in one goal: to replace texting. As Dan Frommer points out, the opportunity to replace texting is still enormous â€” SMS is still a $100 billion a year industry globally â€” and WhatsApp is the company in the best position to seize that opportunity. If WhatsApp had abandoned its goal to create a platform for games, or jump on the photo-sharing app bandwagon, it might not have been in the position it is in today.

Betting nearly a tenth of its market cap on a messaging app is a big risk for Facebook, but at least it bet on the only app thatâ€™s more social than Facebook itself. “WhatsApp is the only app weâ€™ve ever seen with higher engagement than Facebook itself,” Zuckerberg said on a conference call today. Perhaps this is the only reason Facebook acquired WhatsApp. Or perhaps itâ€™s a sign of something bigger taking place, a diversification of Facebook as a company. But its ideals are still true to Zuckerbergâ€™s stated mission, and the scope and ambition of what he means by “connecting the worldâ€™s people” has been fully revealed. However way the worldâ€™s people choose to connect next, you can bet Zuckerbergâ€™s going to be standing not far off, wearing a grin and holding an open wallet.

US expresses grave concern over wave of bombings, killings in Nigeria

A dumb car thief, Jose Espinoza, has been arrested even after he sprayed black paint on his face to avoid being detected. But his luck ran out when he was found sitting in a stolen car that was parked close to his house. According to the Madera Police, Espinoza fled from the area after learning […]

NEW YORK (AP) â€” Amy Adams wore a strapless, dark blue Gucci couture gown and Hollywood’s “it” fashion darling of the year, Lupita Nyong’o, showed up for the Oscars in a goddess look of ice-blue silk Sunday night. Nyong’o, atop the awards season’s best-dressed lists as she made the rounds for “12 Years a Slave,” […]