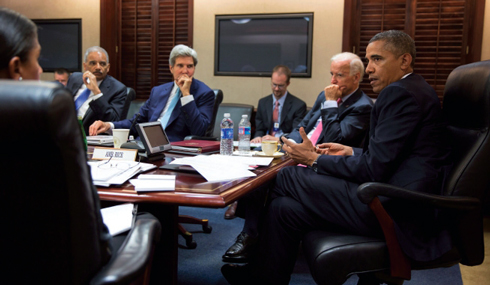 CHICAGO (FinalCall.com) – With the American government on the brink of inserting themselves into the affairs of yet another Muslim country, the Honorable Minister Louis Farrakhan delivered a stern warning to the global warmongers and blood-shedders providing much needed clarity regarding the worldwide geopolitical landscape.

“The government of America and its leadership is taking America and the world on a very dangerous course, and I would not be a good student of my teacher the Honorable Elijah Muhammad as a Warner from Allah, and not raise my voice in harmony with his, to warn President Obama and this administration as well as the Congress of the United States, of the danger of the course that America is embarking on,” said Minister Farrakhan.

Protests took place in the United States and abroad August 31, the same day Minister Farrakhan’s words were broadcast. It seems America has such an extensive history of deceptive practices and false flag operations that considerable doubt exists in the minds of the American people as to whether the Syrian government used chemical weapons, and whether the American military should intervene, said the Minister.

The people have also grown tired of decades of seemingly endless wars abroad while budgetary shortfalls continue in this country.

According to a recent Reuters/Ipsos poll, only 20 percent of the American people believe America should take military action. While the U.S. paints itself as global peacemaker, her history reveals something altogether different.

It was promised that peace and democracy would be delivered in Afghanistan, Iraq and Libya. All three of those countries are now experiencing bloodshed and turmoil. In Egypt, despite a democratic election won by the Mohamed Morsi, the candidate from the Freedom and Justice party of the Muslim Brotherhood, the country now faces governmental upheaval.

Minister Farrakhan has consistently uncovered the hidden schemes of the deceiving blood-shedders revealing the global hegemonic ambitions of the Neo–conservatives.

The United Nations Charter militating against the use of force or intervention in the sovereignty of other nations as well as the United States Constitution is “gradually being ripped to shreds,” said the Minister.

“There is no more international law and order, just the law and order of the powerful against the weak, both, in the world and now in the United States of America,” he added.

Another point of contention is the hypocrisy being shown by America claiming to be outraged that chemical weapons were used, when in fact, America employed the use of chemical weapons that killed and maimed civilians during the Vietnam war, as well as the 2003 invasion of Iraq. Decades later, America’s own patriotic soldiers are suffering medical complications as a result of being exposed to use of those chemical weapons.

According to reports, between 1962-1971, America used millions of gallons of defoliants and herbicides such as Agent Orange in Vietnam causing hundreds of thousands of deaths, as well as generations born with and birth defects. Napalm was used in Hiroshima and Nagasaki as well as Vietnam, and in Iraq, the Minister noted the use of bombs containing Depleted Uranium and White Phosphorous. The same types of bombs have been used by Israel—the nation whom the Minister referred to as America’s “companion in wickedness”—during its 2009 attack on Gaza in which dozens of civilians were killed.

Minister Farrakhan said the narrative being offered by the Zionist controlled media is far from the truth. Though they have continued to be the main distributors of “evidence” implicating the Syrian government in wrongdoing, Israel is not a dispassionate observer in the Syrian conflict, he said.

“These lies and half-truths spread by the Zionist controlled media are purposely spread to infect the minds of the people and the peoples of the world, that we should think along the lines of the mischief makers and the blood-shedders in furtherance of their wicked objectives,” said the Minister. “Israel is (America’s) companion in wickedness, so you both are headed down into the bottomless pit of hell,” he added.

America the oil and gas junkie

The United States sends its military anywhere there are resources they desire, the Minister said. Syria has at least 2 and a half billion barrels of oil in its fields making it the next largest Middle Eastern oil producer after Iraq and new gas fields have recently been identified, making Syria a tantalizing target for the Western powers.

The Minister again noted the plans of Neo–conservatives—inside and outside of government—to foster regime change in seven countries, starting with Iraq and to include Syria, Lebanon, Libya, Somalia, Sudan and Iran. Many of these advisers have led Mr. Obama in ways that have eroded his credibility in the country, and with the nations of the Earth.

“May I respectfully say Mr. President, your advisers don’t seem to be your friends,” said Min. Farrakhan. “Mr. President, they’re destroying you little by little so that you’ll become involved in the spider web of their lies and treachery,” said the Minister.

From the Nile River in Egypt to the Euphrates River in today’s Iraq, and major parts of today’s Egypt, Saudi Arabia, Israel, Jordan, Palestine, Syria and Lebanon in the future these countries will be inhabited by the true Children of Israel. The true Promised Land for the true People of God’s choice.

“The parts that the Jewish people call Greater Israel or Eretz Israel; that (land) does not belong to you,” the Minister said. “Unfortunately, you will die there, but your blood and the Palestinian blood and Arab blood and the blood of others will purify that area for the real owners of the Kingdom of God,” he added.

“Allah is going to use your blood to purify that area of the world for the Messiah to come back and bring back with him the people of God’s choice, for the Holy Land—Mecca in particular—will be the headquarters of the Mahdi and the Messiah,” he said.

US: Video shows dramatic rescue of 4-year-old in mudslide

ARLINGTON, Wash. â€” As more bodies were found in the remains of the deadly Oso mudslide in rural Washington state, there was a glimmer of bright news with a video of the dramatic helicopter rescue Saturday of a 4-year-old boy trapped in a mountain of clay.   Members of the Snohomish County Helicopter Rescue Team […]

JERUSALEM (AP) â€” The love life of Prime Minister Benjamin Netanyahu’s son is setting off sparks â€” in Israeli politics. News that 23-year-old Yair Netanyahu is dating a statuesque non-Jewish Norwegian university student was not only a juicy item for the gossip pages. It also unleashed an uproar from religious lawmakers opposed to intermarriage, and […]

Justice's delay isn't necessarily justice denied for Jill Kelley, the Tampa socialite entangled in the scandal that toppled former CIA director David Petraeus.   The Justice Department has asked for a 30-day extension, until Sept. 4, to respond to her lawsuit against the government for violating her family's privacy, rifling through her e-mails and leaking […]