The 36-year-old rapper often comes across as being rather angry, but he was smiling and having a good time as he sat down to tape an interview for Kris Jenner's talk show "Kris," a source tells "omg! Insider."

During the chat with his girlfriend Kim Kardashian's mother, which airs Friday, West opens up about his relationship with Kim, living in the spotlight, and, oh yes, baby North. The proud pop even flashed a pic of his little lady, who was born on June 15 but has not yet been seen by the public! (Somehow they even managed to keep her under wraps on Saturday as they attended the funeral of Kanye's grandfather, Portwood L. Williams, in Oklahoma City.) 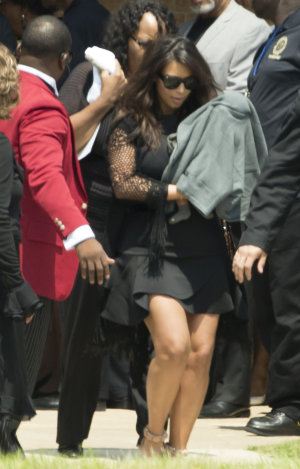 "The baby is a mix of both of them, you can see Kim and Kanye in her face," the source says. "It was very sweet the way he wanted to share [the photo]."

The insider predicts that Kanye's appearance will mean big ratings for the show, which is exactly what Jenner is hoping for since the interview will mark the finale of a six-week trial run for the gabfest.

"It's a Kanye no one has ever seen before!" the source adds. "He almost has a Tom Cruise moment on the sofa."

Although reports have claimed that West and Jenner don't get along, no bad blood is evident during the interview — quite the opposite.

"It was a love fest between him and Kris," the source shares, noting that Kanye seemed genuine. "They even tell each other they love the other one on camera."

CBS correspondent Lara Logan apologized Friday for "a mistake" in an explosive 60 minutes report on the attack on the U.S. diplomatic compound in Benghazi, Libya, and said the network no longer had confidence in the credibility of its key source.   CBS, in a separate statement, said it is investigating whether its informant had […]

Hillary Clinton has finally given her side of the story in her use of personal email for work duties saga. Speaking at a press conference, Clinton said she did it primarily for the sake of convenience as she didn't want to lug around 2 phones. She however stated that contrary to speculations that her email […]

The dangerous "knockout" attacks on strangers in large U.S. cities are leading to arrests, more officers flooding the streets and more warnings for vigilance among an unsuspecting public.   Hoodlums have dubbed the violent practice as the 'Knockout Game,' where teens try to randomly knock out strangers with one punch.   The attacks have raised […]