The proposal—an extraordinary step in the face of this year's revelations from fugitive NSA leaker Edward Snowden—drew sharp responses from Republican lawmakers who suggested the president was retreating under political pressure. The tone of the reaction from Republicans and skeptical Democrats suggested Mr. Obama has a new fight on his hands, reminiscent of the two-year battle that preceded reforms of the surveillance law in 2008, during the George W. Bush administration. 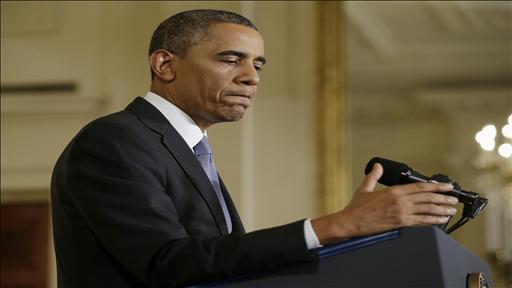 Does the President’s speech on surveillance mark a shift in American policy in the war on terror? Mark Jacobson, senior fellow at the Truman National Security Project, joins the News Hub. Photo: Associated Press

The most significant proposal would restructure the Foreign Intelligence Surveillance Court, the secret court that oversees surveillance programs in the U.S., to provide for an advocate for privacy concerns. Mr. Obama is also seeking unspecified reforms to the Patriot Act to increase oversight and place more constraints on the provision that permits government seizure of business records.

Alongside the Obama announcement, the administration released a white paper "outlining the government's legal basis for an intelligence collection program under Section 215 of the USA PATRIOT ACT."

The president's actions, a concession to civil libertarians and critics of government secrecy, come as Mr. Obama confronted intensifying political pressure from his own party.

Mr. Obama signaled some technological tweaks to the program would be one of his priorities. "Maybe we can embed technologies in there that prevent the snooping regardless of what government wants to do," he said.

The president's announcement marks a significant about-face. Just this past June, Mr. Obama defended the program. "I think on balance, we have established a process and a procedure that the American people should feel comfortable about," Mr. Obama said at the time.

He said he hasn't "evolved in my assessment" that the programs are carried out properly, but acknowledged that, as a senator, he "expressed a healthy skepticism about these programs."

During a 2005 Senate debate over reauthorization of the Patriot Act, Mr. Obama was one of nine senators who signed a letter expressing concern about the potential for U.S. leaders to abuse provisions of the act. He focused on Section 215, which he and the other senators said would allow "fishing expeditions targeting innocent Americans" by permitting the collection of phone records. Section 215 is the same provision he recently defended and the one he said Friday should be re-examined.

He said after he came into office in 2009, he made changes to the program, including adding auditing and other oversight functions.

White House officials said the president came to Friday's conclusion after discussions with lawmakers and other officials. But the president was facing stiff resistance to his position from members of his own party in Congress.

The advocate would be a major change for a court in which the government currently presents its case to a judge on the secret court to obtain approval. The only exchanges that take place are between the judge and the government, which critics say skews decision in the government's favor. The court almost always approves the final government proposal.

While the Obama administration had defended the current court structure, administration officials said Friday that new measures were needed to restore public confidence in the court. Mr. Obama is also seeking revisions to the Patriot Act to increase oversight and place more constraints on Section 215, which permits government seizure of business records and is the basis for the collection of the phone records of most Americans. The specifics of those changes are unclear.

In a move to make public more information about how some NSA surveillance programs work, NSA is slated to issue new documents to provide an "operating manual" to put NSA programs in context, senior administration officials said.

NSA will create a new post of privacy officer. And Mr. Obama also established new group to lead a review of U.S. surveillance efforts with a final report due at the end of the year.

It isn't clear how quickly any legislation would advance on Capitol Hill.

In the past, such issues have embroiled Congress in contentious debate. The Senate Intelligence Committee has announced hearings for this fall.

In an early indication of the difficulty ahead, some Republicans who have been defending the NSA surveillance program lambasted the president. Rep. Pete King (R., N.Y.), a senior member of the House Intelligence Committee, called the president's announcement "a monumental failure" of wartime leadership.

"We need a president who defends our intelligence programs, explains them appropriately to the American people, and uses every legal capability in his arsenal to defeat al Qaeda," Mr. King said.

A spokesman for House Speaker John Boehner (R., Ohio) criticized Mr. Obama for inadequately defending the programs. "Transparency is important, but we expect the White House to insist that no reform will compromise the operational integrity of the program," said spokesman Brendan Buck.

The administration's proposal to bring an adversarial voice to FISA courts was welcomed by members of his own party, including Sen. Richard Blumenthal (D., Conn.) and Rep. Adam Schiff (D., Calif.), who were already backing legislation to make such a change.

Mr. Obama's proposals met with a lukewarm reception from civil libertarians. The head of the American Civil Liberties Union, Anthony Romero, said in a statement that he welcomed the reports as an initial step, but "they are not nearly sufficient." Mr. Romero said more reforms are needed for other surveillance programs operating in the U.S.

Both parties are divided internally over the issue, making any congressional debate politically perilous. While leaders of both parties generally have stood by the programs, the House recently only narrowly defeated an amendment to cut off funding for the NSA surveillance of phone records.

The Republican chairman of the House intelligence committee, Rep. Mike Rogers of Michigan, struck a more bipartisan chord, saying his committee would continue to work on legislation that meets the goals the president outlined.

As a down payment on the administration's promise to provide the public with more information on surveillance programs, the Justice Department issued a 22-page "white paper'' explaining the practical and legal rationales behind the collection of bulk telephone records of most Americans.

The collection of nearly all call records between phones, including time and duration of such calls, "is the only practical means to find those invisible connections in an effort to identify terrorist operatives and networks,'' the document states.

Even as they insisted the program has been carefully supervised by Congress and the courts, officials acknowledged the Foreign Intelligence Surveillance Court has faulted the government for violating the court orders that govern the program.

—Devlin Barrett contributed to this article.

Write to Siobhan Gorman at siobhan.gorman@wsj.com, Carol E. Lee at carol.lee@wsj.com and Janet Hook at janet.hook@wsj.com

WASHINGTON — The latest in a summer-long string of sexual assault crises for the military — news that 60 sexual assault counselors, recruiters and drill instructors have been relieved of their jobs — has forced the Pentagon to explain its effort to combat the problem.   The services' reviews of their backgrounds had found violations […]

Jesus did not finish the New York City Marathon

Warning flags for the Tea Party and Democrats in 2014

WASHINGTON — As voters in some states cast ballots Tuesday, warning signs flared for Tea Party forces and the Democratic Party about their prospects in the broader and more critical midterm elections precisely one year from now.   The staying power of the conservative movement that burst onto the scene four years ago was called […]