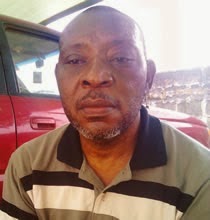 Unknown to many movie fans and fellow Nollywood practitioners, a former Vice President of the Actors Guild of Nigeria and seasoned actor, Prince James Uche, is still struggling to survive a strange illness that has kept him off the screen for eight years ago.To make matters worse, Uche’s landlord has just served him a notice, ordering him to quit his residence at 45, Yetunde Brown Street, Gbagada, Lagos.

The ailing actor, who now spends most of his time in the premises of a Catholic church near his residence, in an interview with our correspondent on Thursday, recounted how he found himself in his present condition.

He said, “All I can remember is that something struck me on the left side of my face about eight years ago, when I was heading for the burial ceremony of Pete Edochie’s mother at Nteje in Anambra State. I had no idea what hit me in the face, but it happened when I arrived at the junction leading to the town.

“I got to the venue of the ceremony and stayed in the town for two days. On the third day, I suddenly found that I could no longer move my body freely. Although I barely managed to get up on my feet, I could not climb up the staircase.

“I had to wait till the following Sunday before deciding to leave for Lagos. But my friend, Edoche, persuaded me to follow him to Enugu where he lived at the time. I slept in Enugu on that day. In the morning I went for treatment in a hospital.

“After the doctor had finished examining me, he stared at me with his mouth half open in shock for a long time. When I asked what was wrong, he said I should have been dead. He took my pulse again and then, sweating, said my blood pressure was abnormally high. He said it had risen up to 300 and it was a miracle that I was still alive.”

The doctor also told the actor that, judging by his blood pressure, he should have been dead or paralysed. That was how Uche initially discovered that he had a heart problem.

Although the doctor in the Enugu hospital prescribed a certain drug for his illness and instructed to take it for the rest of his life, Uche had thought it was nothing to worry about and he hoped to recover quickly.

Unfortunately, eight years after, the actor, whose career has been seriously affected by the ailment, is still battling for his life. Apart from spending all his life savings on hospital bills and drugs, the illness has cost him his marriage. It was gathered that at a point, Uche’s wife was forced to leave their matrimonial home because she could no longer cope with the burden of taking care of him and their three children.

Uche’s case has progressively declined over the past years. Apart from suffering an undefined heart disease, he is gradually losing his memory and sight (he could barely glimpse our correspondent).

Also, to compound the actor’s problem, his kidneys no longer function properly. With financial assistance from members of his church – Our Lady the Queen of Peace Catholic Church in Gbagada, Lagos – he was able to undergo five dialyses in 2013. Yet, it is feared that the kidneys may pack up due to inadequate medical attention.

Apart from looking quite emaciated, Uche’s speech is slurred and most of the time, incoherent. Some members of the Society of St. Vincent of Paul in his church were moved by his plight to care for him three years after his wife left with their three sons.

A female member of the Society said that other relatives of the ailing actor had virtually abandoned him to his fate.

She said, “James Uche’s family has not helped his situation at all. Maybe, if they had been around him, his health would not have deteriorated this bad. When his wife took the children and left, he was all alone in their residence. Nobody visited him. None of his relations, colleagues or friends visited him or volunteered to give him his drugs until members of the Society of St. Vincent the Paul decided to care for him.”

Describing his present condition, she confirmed that the actor’s blood pressure had been consistently high, noting that at a point, some kind-hearted people picked him up and took him to the General Hospital, Gbagada where he was admitted in the intensive unit for some time and made to undergo a number of medical tests.

The lady continued, “The bottom line is that other things came up. His kidney was seriously affected and he had to undergo five dialyses in March, 2014. From what we have seen, he is also afflicted with diabetes. This is why he has been placed under a strict diet. He doesn’t just eat anything. His eyes are so impaired now that he could barely see objects. We have even taken him to St. Mary’s Hospital in Ago Iwoye, Ogun State. As it is, everything is related to high blood pressure. The ailment has seriously affected the organs in his body, especially the kidneys.”

It was also learnt that members of the Society made an effort to contact the Abia State Government, through the representative of the Item Constituency in the House of Assembly, for assistance to the actor. But they said the person did not get back to them.

Sometime last year, word reached the Actors Guild of Nigeria that Uche was still seriously ill. A delegation was sent to visit him in his home. He was subsequently taken another hospital in the Gbagada area of Lagos for treatment and placed on health insurance, which gave him access to free drugs. Ever since, the AGN has done anything else to assist him.

It was a night to remember on the 5th of December  2010 as award winning movie â€˜Between Kings and Queenâ€™ was premiered at the Silverbird Galleria  in pomp and style. Starting with a red carpet that lasted for about  an hour and half, journalists and photographers had a field day interviewing and taking pictures of […]

Are Rihanna and Chris Brown Off Again?

Rihanna and Chris Brown may have spent New Year’s Eve together – and in bed – but the rekindled romance may not have survived the first week of 2013. Over the course of three days, the “Diamonds” singer posted a bunch of inspirational quotes on Instagram, all alluding to relationship woes. On January 6, her […]