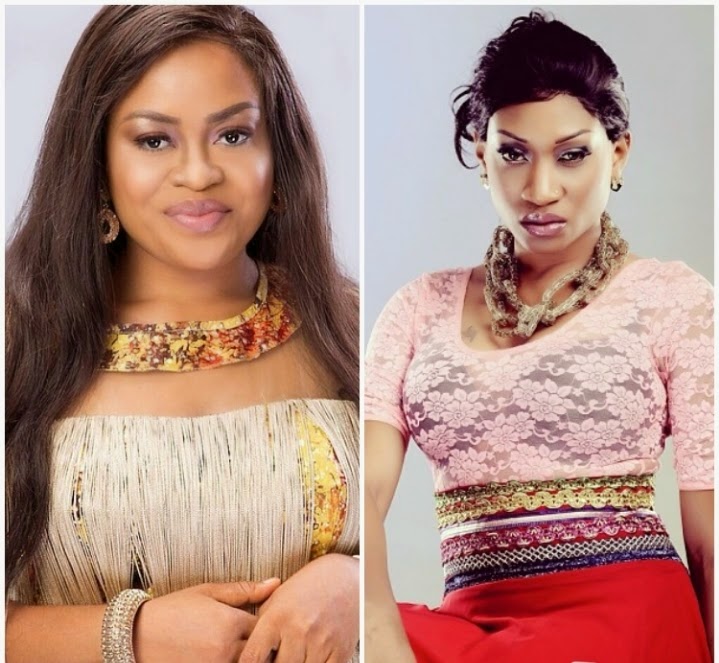 In recent times, It has been observed that beautiful actress, Nkiru Sylvanus, has been saying it openly that she can become a second wife if the man truly loves.

But what we didn't know was that, it seems her words were inspired by the fact that the man who was supposed to marry her but was snatched from her by a fellow actress, Oge Okoye, might be coming back to take her as his second wife.
Nollywood girls and their husband snatching saga…this one is hot! Details below:

It's no longer news that Nollywood darling actresses Oge Okoye and Nkiru Sylvanus are involved in one of the biggest scandals from last year. Nkiru Sylvanus is currently engaged to her colleague Oge Okoye's husband, Stanley Duru. They would have been married by now if not that their story was made public and the couple was forced to pause their wedding plans.

A lot of people are blaming Nkiru Sylvanus, who coincidentally has in many interviews revealed she doesn't mind being a second wife. However, a family source from Nkiru’s camp who knows about the whole affair, has revealed the true story to Ynaija and the source has choose to be anonymous:

“It is funny how the media is blaming Nkiru when it is actually a complicated affair. Oge and Nkiru used to be close friends, they met Stanley at the same time in Enugu in 2006.
Nkiru and Stanley fell in love and Oge the back stabber, knew this yet somehow she
sheepishly let Stanley impregnate her. Nkiru was hurt but she let go of the love of her life for a friend, she didn’t want her to be put to shame and mocked for having a child out of wedlock. So, Oge Okoye and Stanley Duru moved to Amsterdam and got married.
Of course a dog will always return to its vomit, after having their first son, Oge cheated on Stanley with a friend of his and he paid her back by dating one Dutch lady, Barbara with whom he now has a child, Uchechi, but let’s leave that story for another time. They somehow reconciled and she took in again and delivered a baby girl in 2010 but they officially parted ways in 2012, you media people didn’t know that, did you?
On realizing they were both single again, Nkiru and Stanley reconnected and they regretted letting each other go. They got really close after Nkiru escaped from the kidnappers’ den.'' On the postponed wedding, the source said:
“They have done the family introduction already. They were actually planning a secret wedding for December 27 but it has been postponed, they didn’t plan for the news to get out, so that changed everything”.

When asked why the wedding was postponed, the source declined and said, “That’s how much information I can give my dear, Nkiru’s media people are working on a press statement already, everything you need to know will be revealed there.”

Contrary to reports that Oge Okoye is unhappy with the development, the source claimed otherwise.

“She [Oge] is not furious, she is not devastated at all. She and Stanley parted ways since and she has moved on. Moreover she has no reason to be hurt, after all she snatched Stanley from my cousin first”

Nkiru has said more than a few times, that she would not mind being a second wife. While speaking on a TV programme months ago, she said:
“If the situation and the person is good, I’ll go for it. I’ve said it before that if ladies don’t stop this nonsense they call ‘one-man-one-wife’, many of them will get to 40 and still remain single. There are more women than men. Go to churches, the number of single ladies in most cases is three times the number of single guys”.

The game isn't over yet, keep your fingers crossed guys and we will keep updating you till the end.

Between physicians and their fatally wounded patients

As I was completing this write up for publication today, I read an article on the topic this morning written by Mbonu Linus Nwabueze, titled â€œBullet Wound Bill, 2008: Hon. Mayor Eze Emphasisâ€ and published in Nigeria Village square.

Glo X-Factor: 17-yr. old twins, others for next stage

The Abuja audition of X Factor, the world’s number one music reality TV show brought to Africa for the first time by Globacom, ended on an exciting note as twenty-two aspiring singers/groups made it to the next stage of the contest for the unprecedented N24 million prize money and a recording contract with Sony Music […]

So Sad! actor, Muna Obiekwe passed away on Sunday, Jan 18, 2015. His death was shocking and painful to loads of people most especially his colleagues. Celebrities like, Tonto Dikeh, Stella Damascus, to name a few have also sympathized. According to reports, the body of the deceased 36 year old is currently embalmed at the […]