Safety experts have called for better standards, to protect consumers from faulty goods that can catch fire.

Seventy people a year are killed, and hundreds of thousands are injured, as a result of fires in cookers, fridges and tumble driers.

The Electrical Safety Council(ESC) said manufacturers need to do more to trace their customers if they need to warn them about safety issues.

It said the current guidelines are not good enough.

Last December Catherine Paterson, from Middlesbrough, had a fire that destroyed her garage.

The fire started in her tumble drier, which was only four months old.

She later found out after searching on the internet that the model she was using had a problem and had been recalled by the manufacturer.

"About ten minutes after the drier was switched on we got a call from the neighbour, who told us the garage was on fire," she told the BBC. 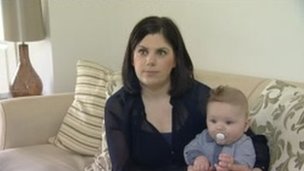 Catherine Paterson had a fire in her tumble drier

The fire was so fierce that it destroyed the garage in fifteen minutes, and caused £10,000 worth of damage.

"They knew the product was faulty since the end of November but no one got in touch," said Catherine.

It was beginning of February when someone got in touch to let us know that there was something wrong."

That was two months after the fire.

According to Trading Standards, the manufacturer of the tumble drier that Catherine owned did everything it could to tell people that the product was faulty.

That included putting notices in the media and online.

But Steven Curtler, product safety manager at the Electrical Safety Council (ESC), said Catherine's case highlights how current guidelines for manufacturers are not good enough. He is now calling for changes need to be made to industry procedures to ensure peoples' safety.

"One area we believe there could be significant improvement is in the traceability of products," he said.

The ESC wants more information about consumers to be taken at the point they buy the appliance.

"The more information you have about the person who has purchased that product the easier it will be to provide critical information about the safety of the product," he added.

According to figures from the ESC, on average 70 people die and 350,000 people are seriously injured every year by household items like fridge freezers, gas cookers and washing machines.

In 2011 six members of the same family, a mother and her five children, were killed in north London, when a fridge freezer caught fire.

The London Fire Brigade told the BBC that fridge freezers are the most dangerous household appliance when involved in a fire.

The problem is at the back of the fridge where there is a large amount of foam insulation, which is highly flammable.

The London Fire Brigade warned that if people notice any strange noises coming from their fridge or freezer , they should call the manufacturer or an electrical repair expert immediately.

How Nigeria can be great againâ€” Anyaoku, Anya

IN SPITE of the myriad of socio-economic, political and security challenges the country is currently facing, Nigeria can be great if our leaders and people did the needful, Chief Emeka Anyaoku and Professor Anya O. Anya, have said. From left— Professor Barth Nnaji, former Minister of Power; Princess Stella Oduah, former Minister of Aviation; Chief […]

National Leader of the All Progressives Congress (APC), Bola Tinubu, has said the party was formed so that Nigerians from all walks of life and social station will gather under one tent to develop the nation on the basis of equity and shared prosperity. Tinubu, who stated this on Saturday shortly after he was awarded […]