25 year old Hope Olusegun, and seven of his mates were arrested in December 2012 at the 1004 Housing Estate by the Economic and Financial Crimes Commission over allegations of fraud and internet scam.

The 'Yahoo Boys' who have been operating for quite a while lived a lavish lifestyle, bought the most expensive cars and showed off at every opportunity they got. One of the undergraduates, Hope Olusegun (pictured above) an indigene of Okene, Kogi State, had a Mercedes Benz SUV, and a 4Matic Mercedes Benz car and before he was arrested, he bought a Toyota Camry for his one year old son.

Yes, that's what they did with other people's money. Fortunately some residents at the estate alerted the EFCC about their activities.

See the EFCC press statement regarding the case
“One of the undergraduates, Hope Olusegun, a 25 year-old from Okene in Kogi State, and claims to be a student of Computer Science at the Kuala Lumpur Metropolitan University, Malaysia. He was arrested by operatives of EFCC over allegations of fraud and internet scam.
A search conducted by EFCC operatives at Olusegun’ s apartment led to the recovery of several items such as laptops, iPad phones, traveling documents, cheque books, flash drives, internet modem, and three exotic cars – a Mercedes Benz Jeep, One 4Matic Mercedes Benz Car and a Range Rover Sport SUV. When asked how he came about the cars, Olusegun said the cars belonged to his sister who he claimed lives in the United Kingdom. Operatives of the EFCC also downloaded over 80 implicating documents from the laptops recovered from Olusegun.

However, the Commission is making effort to track down other members of Olusegun’s syndicate who are currently at large. Tunde Wasiu Sodiq, another undergraduate and member of another syndicate with close affinity to Olusegun’s gang was also nabbed by operatives of the EFCC at the Housing Estate. 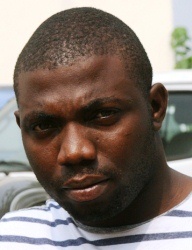 Their arrest was sequel to a petition on their notorious activities at the Housing Estate. Sodiq (23) hails from Lagos and claimed to be an undergraduate of Brandry University, Malaysia .

The leader of the syndicate, Badmus Akeem, hails from Ayetoro, Ogun State and attended Oniwaya High School, Agege. He claimed to be a traveler who does odd jobs wherever he travels.”
Tunde Sodiq claimed the Range Rover Sport car which was recovered from them belonged to his mother but the personalized number plate bears his nickname – “T.Wizzle”. In his statement, he claimed his mother “decided to customize the car plate number after the name of her first son."

The suspects will be arraigned in court soon.

Lagos State chapter of Peoples Democratic Party, PDP, has called on the Economic and Financial Crimes Commission, EFCC, to probe the Governor Babtunde Fashola-led administration over alleged massive corruption. However, in a swift reaction, Lagos State chapter of Action Congress of Nigeria, ACN, dismissed the call by PDP, describing it as all noise and no […]

Before now, Basil, (real names withheld) had absolute confidence in his friend, Jude. Little wonder he allows Jude into his house without any iota of suspicion. However, all that trust has been eroded as the Akwa Ibom State indigene residing in Nsukka stumbled upon an an unbelievable sight when the man he called his friend […]

Schools and universities, as well as students, teachers, and academics are intentionally targeted for attack in conflicts worldwide, the Global Coalition to Protect Education from Attack said in a 250-page study released Thursday.   In the study titled: â€˜Education Under Attack 2014,â€ the group identified 30 countries where there was a pattern of deliberate attacks […]