EMINENT persons,  opposition parties and activists have endorsed the claim that President Goodluck Jonathan and his administration were not properly fighting the war against corruption.

While the opposition rounded against what they alleged to be the administration’s incoherence in the war against graft, Peoples Democratic Party, PDP sympathizers sought for understanding for the president with assertions that the president could not fight it alone.

A group of elder-statesmen known as The Patriots, led by legal icon, Professor Ben Nwabueze (SAN) had last Thursday among other things blamed the president for “failure to punish appropriately and promptly the few persons in high positions found guilty of corruption.”

The group also lamented the accelerating descent of the country towards what they claimed a failed state.

Responding to the claims of the elder-statesmen, the Action Congress of Nigeria, ACN, Progressive Peoples Alliance, All Progressives Grand Alliance (APGA) among others described the administration’s campaign against graft as hollow, hypocritical and wholly ineffectual.

Former President of National Economic Summit Group (NESG), Prof Anya O Anya, said the views of The Patriots were not in context and promised to elaborate later. “Those are the opinion of The Patriots. I am just coming from Enugu. I want to see things in context. I will talk about it later,” he said.

The Patriots ‘re meticulous – Ezeife
To former Governor of Anambra State, Dr Chukwuemeka Ezeife, The Patriots had hit the nail on the head and could not be faulted in their assertions.

“From the beginning up to now, anytime The Patriots meet, I take them seriously. Apart from being eminent persons and elders, they don’t talk carelessly, they are always meticulous,” he argued.

Corruption is now legalized – Utomi
Endorsing the assertion of the elder-statesmen, Professor Utomi said:  “There are no doubts that issues raised at the meeting remain of immense concern on the mind of many Nigerians. The Security situation in this country is embarrassing and there is no professionalism in the way we handle things in this country.”

“The issue of corruption and security is worth reflecting on and it has shown how dysfunctional Nigeria has been. Professor Nwabueze and others were very correct on their stand on Nigeria and it is sad that people behind the insecurity situation in this country walk free today.

“It is not only when someone steals N10 billion pension money and transfers it to his personal account, it is beyond stealing or abuse of our commonwealth but the fact remains that corruption has been so legalised in this country now that every politician sees it as a right thing to do in office. We need strong institutions to be able to curb Nigeria’s many problems that are affecting us today.”

“Under the current situation I would like to say without fear of contradiction that the Federal Government has not given the impression that they are fighting the scourge.”

The former Special Adviser to President Shehu Shagari on National Assembly Matters noted however  hinged the near incapacitation of the regime on what he described as “procedural technicalities”, adding that until the law is given a facelift the status quo would remain.

The Octogenarian also advocated the establishment of Special Courts to try corruption cases. “We need to set up special courts and appeal to try cases relating to corruption and sharp practices to relieve the conventional courts and also allow the Apex court to have a final say. We have seen in several instances where the so called big fishes hired the services of high profile lawyers to defend their cases.”

Chief Babatope on his part said:  “For me, the opinion of top citizens of this country cannot be discarded and there is nothing wrong for them to express their opinion on the state of the nation but I disagree with some of their arguments.”

“Corruption happens everyday in this country, though I do not condone corruption but notwithstanding, as senior citizens, they should be seen to be giving elderly advice and ways this country can move forward. I believe any party can be in government at any time, today it is PDP, but the most important thing for us is to come together to provide solution to the problems of this country.” 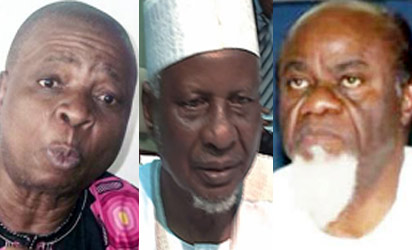 Blaming the PDP administration for the failed war against administration, National Secretary of PPA, Mr. Peter Ameh said, “the Federal Government had not shown the will and desire to fight corruption. This lack of will and desire has given rise to the current disdain for the law, impunity, outright and unbridled theft of our common wealth which have led to  increase in poverty level.”

He continued: “Under Jonathan’s watchful eyes, billions of naira was stolen from the fuel subsidy account and the people involved are being treated with kid gloves. The report on capital market and the non-implementation of the Nuhu Ribadu oil panel probe report further exposed  the administration as abetting corruption.”

Jonathan not committed to win –  APGA
Asserting that the present administration was not committed to the anti corruption campaign, APGA, speaking through its National Director of Publicity, Mr. Ifeanacho Oguejiofor, called for radical reforms to stem the tide.

It said: “APGA sees corruption as not only in the misappropriation and embezzlement of public Funds by government officials and their cohorts, but also in the manner and the general attitude to life of an average Nigerian, where indiscipline is a way of life and the order of the day and being encouraged by those in and outside the government  without qualms. For Nigeria to really develop, this government  should develop  strong muscles and sharp teeth to fight corruption in every facet of life.”

Jonathan is too slow – Sidi
Alhaji Abba Sidi,  Chairman of Conference of Nigerian Political Parties, CNPP also flaying the fight against graft said: “President Jonathan is too slow in tackling corruption in this country. Of course, his inaction could be linked to the fact that he has ambition for which he wouldn’t want to step on the toes of some corrupt people whose support he is counting on.”

It is just a song
A PDP stalwart in Sokoto, Umar Falke Tambuwal on his part said that the battle could be won only if the administration put more energies into the battle.

“If you are a leader and you want something done or stopped, it must be done or stopped if you truly mean it. There has virtually been no punishment on those that have been found deeply engrossed in corruption to serve as deterrence for those intending to do so. To my understanding, only songs of fight against corruption are sung but active measures are taken by the presidency to tackle corruption,” he said.

Mallam Ali Wakili, a retired comptroller in the Nigerian Customs Service, on his part, described the issue of corruption in the country as systemic, saying that the whole system was affected by the menace.

Wakili said that the problem of corruption was not only found among top government functionaries but also  extended to the grassroots.

He recalled how during the subsidy probe in the country, President Jonathan promised that no stone would left unturned in ensuring that anyone found guilty of corruption would be prosecuted.

Speaker of Kwara State House of Assembly and now the House of Representatives Candidate for Ilorin West/Asa Federal Constituency of the state in the forthcoming general election, Hon. Razak Atunwa has pledged his continued commitment towards the provision of quality and standard of education for the students and entire people of the constituency if elected […]

Posted on May 9, 2013 Author Gboyega Akinsanmi