The MRS tank farm in Tin Can Island is on fire following a massive explosion that rocked the sprawling facility in Apapa, Lagos,  an explosion which emanated  from an oil vessel.
Confirming the incidence, official of the National Emergency Management Agency (NEMA) said a fuel tanker caught fire after exploding at the Tin Can Island port in Apapa area of Lagos.

Fire Service and other Concerned Authorities should please be alerted. 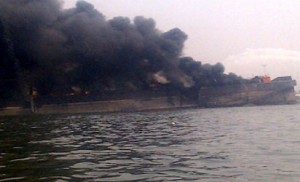 Uche Ogah: A Man with a Heart of Gold

I stayed with my pen for hours trying to figure out the right words to use to describe this dynamic young man. The reason why I was confused is not farfetched. I was being careful not to use words that turn out to be an over-kill. At the same time, there is this burden of […]

Posted on May 4, 2014 Author Agency Reporter

On the Nigerian Public Security Communications System Project Contrary to popular belief that the Public Security Communications System was simply meant to provide CCTV cameras in Abuja and Lagos, it is a major project that has delivered modern security and e-policing infrastructure in the country. Vincent Obia reports   Running out of patience with the […]

MAKURDI — Deputy Governor of Benue State, Chief Steven Lawani,  yesterday, declared his intention to contest the 2015 gubernatorial election in the state. Lawani said he had three weeks ago informed the Benue State leadership of the ruling People’s Democratic Party, PDP, of his intention to run for the position. The deputy governor spoke while […]