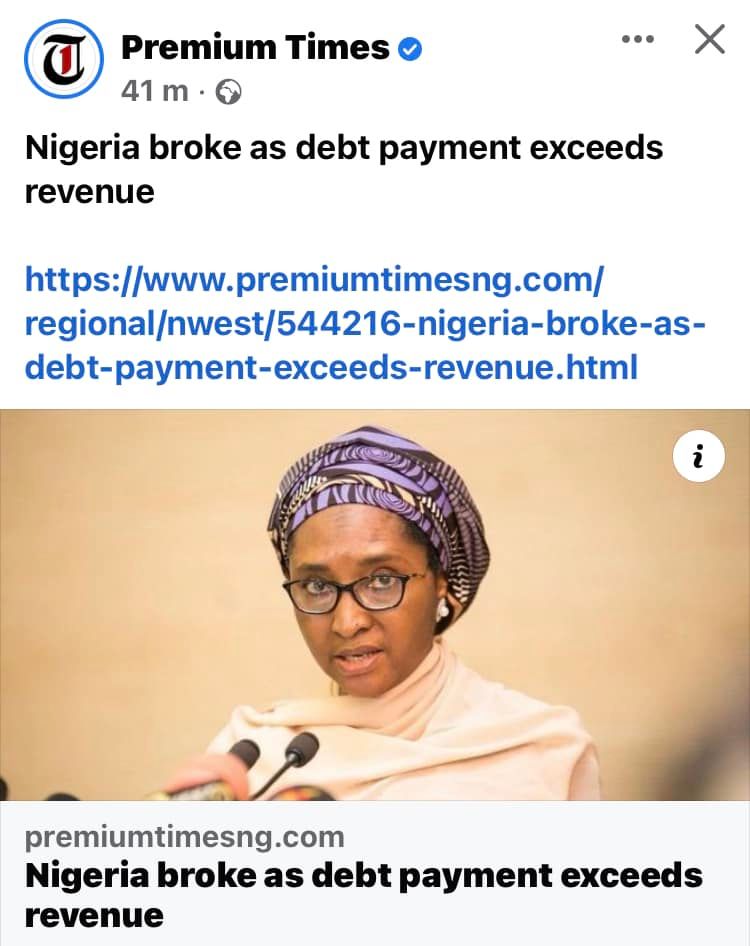 Our debt is now officially higher than our GDP. Even though Mr. Peter Obi mentioned this when he said that the NNPC had not contributed any money to the federation account since January of this year, we were aware of this situation since last year, and J.P. Morgan downgraded the company as a result.

Many of us are aware that this will eventually touch home because we are no longer able to hide it.
What does that suggest? It denotes that our government’s debt is more than our income. Your salary is less than your costs since paying off debts is an expense, to put it simply.
Additionally, if this occurs, countries will continue to lend you money, but at a very high-interest rate because the likelihood of default is great.
Beyond payment default, investors would shun the country, and those who were already there would want to sell their belongings and depart. Hence, the pressure on dollars, which were yesterday sold at N650 to a dollar on the illicit market. Because of the naira’s volatility, any sane investor, including those holding that currency, wants to exchange it for US dollars.

Of course, times of recession or conflict frequently reflect this. In Northern Nigeria, a conflict has been going on. Then the fighting in Ukraine made things worse.
Unfortunately, we only have two undesirable choices: Governments typically raise borrowing in accordance with Keynesian theory to encourage growth and increase aggregate demand. To be clear, we’ll take out more loans!
If we choose to follow modern economic theory, which is what CBN may do, we will print additional money to pay our debts and fulfil our internal duties.

But if we don’t reduce waste, theft, and subsidies, as well as strengthen our capacity for production and revenue generation from foreign trade partners, we won’t be able to maintain this.
Now you understand why we must help Obi instead of AGBADO eaters who continue to favour consumption and theft by moving us from consumption to production and reducing waste.

Previous post The BBC in Nigeria – Between reporting and propagating terror

Next post Accolades as Nigerian genius kid conquers US, Germany, others in Mathematics competitions