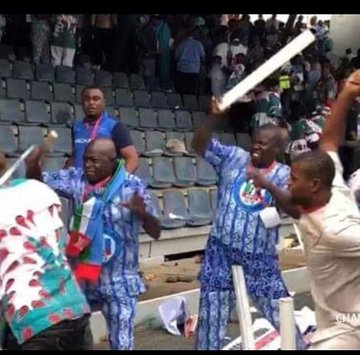 ADAMS Oshiomhole, immediate past Governor of Edo State, may have emerged unopposed as the new National Chairman of the ruling All Progressives Congress (APC), but the party’s national convention was held on Saturday at the Eagle’s Square, Abuja, was largely characterized by anger and violence.

Many observers say the development did not come as a surprise, especially given that the recently held state congresses were also marred by violence.

A video clip shared on Twitter by Channels Television showed the two factions of the APC in Imo State – one loyal to Governor Rochas Okorocha, and the other loyal to his deputy, Eze Madumere, who has also announced his intention to run for the post of the governor  – exchanging blows and throwing plastic chairs at one another.

According to the report, the free-for-all went on while President Muhammadu Buhari was delivering his speech.

Previous post What I heard and saw about Peter Obi at the airport that made me feel embarrassed – Rev. Yinka Yusuf