Adeola Thomas, 38, and his wife, Abimbola Abiola, 34, managed to pocket £87,000 after using 1,400 stolen identities to complete 2,495 handwritten tax and benefits claims forms. And just like the other couple that was reported to have lavishly spent the money on a house in Nigeria, the pair spent the money on designer clothing and electrical items including a 50-inch plasma television. According to Daily Mail Reports.
The fraud was discovered when benefits staff at HM Revenue & Customs noticed they had received multiple tax credit claims from the same addresses. Subsequently, an investigation was launched. Thomas’ hand-written application forms were analysed, computer records were checked, and hours of recorded calls to the Tax Credit Helpline were listened to and a surveillance operation was carried out. The HRMC investigators viewed CCTV footage showing activity outside various North London Post Office ATMs.
Thomas was eventually arrested at a cash point outside a Post Office in Hackney on October 7th last year. He was found to be in possession of 17 Post Office account cards in different names, two mobile phones and two fraudulently completed forms addressed to Jobcentre Plus.
When Abiola was arrested later the same day, she had £4,125 in her handbag. The mother-of-one claimed the money was her child benefit payment. Daily Mail reports that the pair, who carried out the scam between January 3, 2007 and October 7, 2011, tried to claim £827,000 from HMRC, securing £43,000. They also claimed £3 million from the Department of Work and Pensions and received £44,000.
With Abiola’s help, Thomas used stolen personal details to complete 2,495 handwritten application forms, which were sent to the appropriate departments for processing. Thomas, who also happens to be an illegal immigrant pleaded guilty to three counts of conspiracy to defraud and money laundering offences. Abiola, a Nigerian national with leave to remain in the UK was also found guilty of four counts of conspiracy to defraud, money laundering and possession of criminal property.
They were both sentenced to jail this week. Thomas was sentenced to seven years in jail while Abiola received two-and-a-half years sentence. The Judge who read his sentence indicated Thomas should be deported after serving his time in the UK.
Picture of his arrest below: 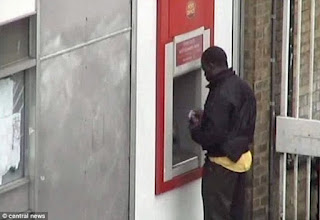 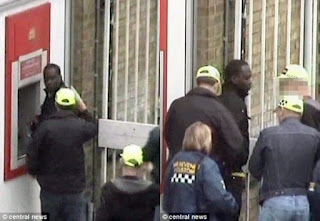 Posted on May 4, 2014 Author Agency Reporter

The abduction of 234 students of Government Secondary School, Chibok, Borno State altered the usually lively plenary in the Senate last week as the chamber was overwhelmed with emotion. Omololu Ogunmade writes   Plenary on April 29, 2014 in the Senate will ever be remembered with nolstagia. It was a day senators at the session […]

At least 60 people, including children, were  Friday killed in a major road accident in Ugbogui near Ofosu in Ovia South-West Local Government Area of Edo State. The collision on the Benin-Ore Motorway involved a bus, a lorry and a petrol tanker. The tanker exploded after the collision, and most of the victims were reportedly […]

THE Nigerian Stock    Ex-change, NSE, yesterday, called on the Federal Government to grant tax incentives to companies listed on the Exchange as part of measures to attract more firms to list on the NSE. The NSE also warned operators to desist from any malpractice capable of tarnishing the image of Nigerian stock market as it […]