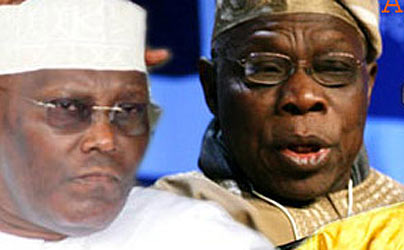 (Codewit)THE lingering feud between former President Olusegun Obasanjo and his vice president for eight years, Alhaji Atiku Abubakar, yesterday, reverberated as Atiku chose the occasion of the 1st Shehu Musa Yarâ€™Adua memorial lecture to display his contempt for his former boss as he skipped him (Obasanjo) in his protocol list.

The former vice president had recognised all the dignitaries at the occasion including the visiting South African President, Mr Jacob Zuma, who was the special guest of honour, but left out Obasanjo.

Atiku, however, was quick to apologise when his attention was drawn to it by an aide of former National Security Adviser, General Aliyu Gusau Mohammed. The former vice president then said: â€œBefore I continue, let me apologize for skipping my boss, President Obasanjo, I apologiseâ€.

Obasanjo is the chairman of the Yarâ€™Adua Foundation while Atiku is the vice chairman.

As if the omission was deliberate, the former vice president went further to relay his persecution under his former boss, telling his audience that like Zuma, he (Atiku Abubakar) was persecuted in office while serving as vice president.

He told the audience which included Vice President Namadi Sambo, who stood in for President Goodluck Jonathan, and former president of Mali, Alfa Konare, that, in the cause of duty and interaction with Zuma, who was then serving as vice to Dr. Thabo Mbeki, ex-South African president, he discovered that he shared many things in common with Zuma, ranging, among others, as coming from a very humble background and rose to become vice president and was persecuted while in office, the same way Zuma was persecuted and kicked out of office.

â€Zuma was persecuted and later removed from office. I was also persecuted while in office, but the constitution of Nigeria blocked them from removing me from office. Ever since we became friends when we established the common things about us, in fact when I visited South Africa as Vice President, President Zuma took me to his village where I was warmly welcomed and I saw beautiful Zulu maidens. When he also visited Nigeria, I took him to my village in Adamawaâ€, he said.

Obasasnjo, however, did not have the opportunity to respond, having spoken first while delivering his welcome address.

The Governor of Jigawa state, Alhaji Sule Lamido, has described the All Progressives Congress (APC) as a party that has no real attributes of democratic ideology that would propel the nation to the Promised Land.   The governor who stated this at the weekend, while receiving the members of Nigerian Guild of Editors that paid […]

ABEOKUTA — A crisis of confidence is brewing between the Vice Chancellor of the Federal University of Agriculture, Abeokuta, FUNAAB, Professor Olusola Oyewole and the members of the governing council of the institution, led by a former Works Minister, Senator Adeseye Ogunlewe. The crisis, Vanguard learnt, yesterday, was not unconnected with the management  style of […]

A foremost socio-cultural youth organisation of Eket federal constituency in Akwa Ibom State, Afigh Iwaad Ekid, has impressed on the federal government to intensify interstate border security patrol to combat further spread of terrorism and insurgency in the country.   The Public Relations Officer of the organisation, Mr Joe Etukudo, made the call while speaking […]