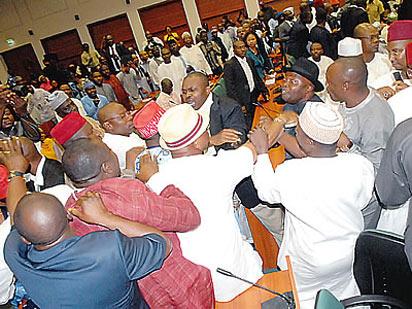 The in-fighting among APC lawmakers over the leadership of the national assembly took a dramatic turn on Thursday, leading to the disruption of plenary. In the house of reps, lawmakers loyal to Yakubu Dogara, the speaker, have taken custody of the mace to pre-empt moves to seize it by anti-Dogara members.

Many APC lawmakers are still unhappy with Dogara and Bukola Saraki, senate president, for upstaging the party’s preferred candidates for their positions. Fracas ensued few moments after Dogara commenced proceedings for the day.

The house was to decide on the remaining principal officers but some lawmakers disrupted the sitting and attempted to hijack the mace. After almost one hour of rowdiness, Dogara was able to restore normalcy to the house and he reconvened plenary.

He told his colleagues to consider themselves “lucky” to have been chosen to represent their constituencies and promised that the crisis would be resolved.

He later adjourned sitting till July 21. While the drama lasted, some of the lawmakers were chanting “Dogara”, while their counterparts on the other divide kept shouting “APC” repeatedly. Femi Gbajabiamila, who the party is proposing to be the majority leader after being defeated by Dogara in the June 9 election,

Leo Ogor, the immediate past majority leader of the house, were among the members who sued for peace during the show of shame. Both men approached the speaker seeking means to resolve the crisis. The APC leadership is proposing Alhassan Doguwa as deputy house leader, Mohammed Monguno chief whip and Pally Iriase deputy chip whip.

See the video of the infighting  below

In a related development, Nasiru Sani Zangon Daura  of the All Progressive Congress (APC) representing Zango/Baure Federal Constituency of Katsina State addresed the Press after the fracas that ensued

Read his press conference as reported by Sahara Reporters below

Gentlemen of the Press: I am Representative Nasiru Sani Zangon Daura  of the All Progressive Congress (APC) representing Zango/Baure Federal Constituency of Katsina State. We are here on behalf of our colleagues of the APC House Caucus to explain to you the unfortunate occurrence during today’s plenary session.

The action that occurred inside the chamber of the House of Representatives was in reaction to the illegal and unconstitutional action taken by Speaker Yakubu Dogara of the House of Representatives, an action in his usual tradition of total disregard to the wishes of the majority members of the All Progressives Congress (APC) Caucus, the Party itself and the spirit of the Party.

We are aware of a letter sent by our Party, the All Progressives Congress (APC) dated 23rd June 2015 conveying the approval of the Party’s Principal Officers vis a vis the APC House Leader, the APC Chief Whip, the APC Deputy House Leader and the APC Deputy Chief Whip for the House of Representatives.

This letter by the Party is in compliance with the expressed wish and mandate of the Majority Members of the All Progressives Congress APC Caucus in the House of Representatives.

This action of the Party and the APC House Caucus is in compliance with the Nigerian Constitution, the House Rules and Parliamentary tradition, practices and precedents in Nigeria and all over the World.

But to our surprise and in breach of our privilege and rights as contained in the Constitution and extant House Rules, Mr. Speaker refused to read the letter from our party.

Therefore, Speaker Yakubu Dogara of the House of Representatives cannot under extant Laws and House Rules Appoint, Choose, Select, Dictate or even provide guidance on how Party Principal Officers emerge or are elected or selected. That responsibility and authority lies with each Party and Party’s Caucus members in the House.

If I may ask is Speaker Yakubu Dogara empowered to do that for the PDP House Caucus???

This action, by Speaker Yakubu Dogara cannot and will not be allowed to stand as it will set a dangerous precedent in our parliamentary practice as it will give the Speaker the right and authority to appoint, Choose, Select, Dictate or even provide guidance on how Principal Officers emerge or are elected or selected by the Majority and Minority Parties in the House of Representatives. This action is capable of truncating our democracy.

As for the claim being made that a particular zone should not be allowed to produce more than one Principal Officer, we say and we say this with all sense of decorum, that this claim is absolutely RUBBISH!!

Precedences were set in the 6th & 7th Assemblies where a single zone, the Northwest, produced two  and three Principal Officers, respectively.

We the loyal and disciplined majority APC Caucus in the House of Representatives are fully committed in ensuring that our party’s and President Muhammadu Buhari’s manifesto, agenda and positions prevail despite the efforts and shenanigans of the opposition party(s) and the few disloyal and undisciplined APC party members in the House of Representatives.

We are determined in our efforts, to utilize all legislative strategies available to us, so as to ensure the compliance with due process and democratic norms and values.

We the loyal and disciplined majority APC Caucus in the House of Representatives and the All Progressives Congress have dished out enough of the carrots, it’s time to crack the whip so as to ensure party discipline and maintain order.

Dare I say, we rode to power on the platform of the party, the party is supreme and thus no one is above the party!

God Bless the All Progressives Congress!

God Bless The House of Representatives!!

Thank You for listening

Confab: No Crime discussing the unity of Nigeria – Jimi Agbaje

MR. Jimi Agbaje became a household name in 2007 during the governorship elections in Lagos State, when he adopted the slogan “Jaykay is ok”. In an interview in Lagos, select journalists caught up with him at his Lagos office, where he bared his mind on the proposal for a national conference and explains why he […]

At last, a compromise has been reached between the delegates from the South and their counterparts from the North on mines, mineral resources, oil fields and other related issues.   Reaching a compromise yesterday, the delegates agreed that item 39 should be retained in the exclusive legislative list in the constitution with a modification that […]

Eligibility Suit against Jonathan: We will Meet in Court, Says PDP Campaign Group

The Peoples Democratic Party (PDP) presidential campaign organisation has affirmed its readiness to defend the eligibility of its presidential candidate, Dr Goodluck Jonathan, to contest the next presidential election in court. The Director of Legal Affairs of the campaign, Prince Adetokunbo Kayode (SAN), made this known while reacting to a suit filed at the Federal […]