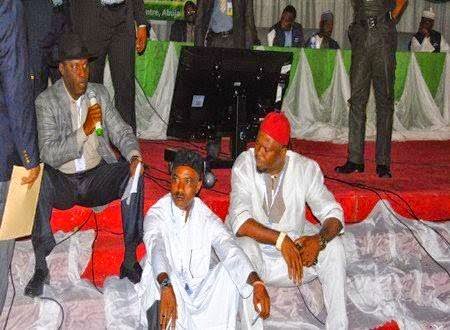 Former Niger Delta Affairs Minister Elder Godsday Orubebe has apologised for his behaviour at the collation centre in Abuja yesterday morning. Speaking with reporters, the PDP party agent, who held up proceedings and used abusive words on Jega, said he regretted his action and asked Nigerian to forgive his behaviour. ”Election is a passionate thing and I really regret what took place this morning. I was unnecessarily pushed by Jega to get to that level. I want to apologise particularly to young Nigerians that look up to take politics as a career to say that what happened was not intended to cause them any embarrassment.

To Nigerians generally, I regret my actions as even an elder in the church, and a leader, the young men expected to see a lot from me and I believe that if there was any disappointment they got from me I apologize to Nigerians and to the youths of this country.”On President Jonathan conceding defeat, Orubebe said:“Two things are in place. The president is the president of everybody. As a statesman and as a president; he has done what he should do.” On whether the PDP will challenge the result, he said: “I cannot decide for the PDP. It is a large family. We were sent on an errand to come back to report. We will go and report to the party and the party will take the necessary action it has to take.

You remember what happened in Ekiti’s governorship election when the governor congratulated his opponent and the party went back and said this is what they have seen. The candidate is not the party, he is a candidate and he has acted very well as a statesman, and as the president, the father of all. For us, we are agents to be here to see what transpired here and give report to them.

The Federal Government is to spend N233 billion on post-insurgency reconstruction and rehabilitation of the communities ravaged by Boko Haram in the North-East part of the country. The Chairman of the Presidential Committee on North-East Intervention, General Theophilus Danjuma (rtd), disclosed this when President Muhammadu Buhari, represented by the Vice-President, Prof. Yemi Osinbajo, declared open […]

Manufacturers Association of Nigeria, MAN Ikeja branch, has expressed concern over numerous charges their members are made to pay to secure the Bank of Industry, BoI, loans, calling for immediate review and possible reduction. Expressing this position at a business luncheon for chief executives and managing directors of manufacturing companies under the chapter, the chairman, […]

The Majority Leader of Kwara State House of Assembly, Abdulganiyu Abdulkareem, yesterday debunked rumours that the assembly had concluded plans to impeach the state Governor,  Abdulfatah Ahmed. Abdulkareem, who made the denial  in an interview with journalists  in Ilorin, said the rumours were baseless and unfounded. There were rumours that the assembly was planning the  […]